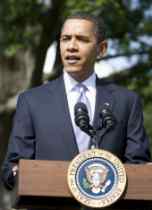 Renewing his commitment to engage the Muslim world on the basis of mutual interest and respect, US President Barack Obama today pledged "concrete actions" to build a world that is more peaceful and secure, in his Ramadan message.

In a video address, the US President greeted 1.5 billion Muslims across the globe on the occasion of Ramadan, a month of fasting and reflection, and reasserted that he is committed to build a world that is more peaceful and secure.

The US embassies in the Muslim world had held consultations with governments and citizens and he was now "focused on pursuing concrete actions", Obama said in the message which was translated in about a dozen languages, including Hindi, Urdu, Bengali and Punjabi.

"We have listened. We have heard you. And like you, we are focused on pursuing concrete actions that will make a difference over time both in terms of the political and security issues that I have discussed, and in the areas that you have told us will make the most difference in peoples' lives," he said.

He also renewed his commitment to engage the Muslim world on the basis of mutual interest and respect.

"Ramadan is a time of intense devotion and reflection  a time when Muslims fast during the day and perform "tarawih" prayers at night, reciting and listening to the entire Koran over the course of the month," Obama said alluding to his father's Muslim background.

"These rituals remind us of the principles that we hold in common and Islam's role in advancing justice, progress,
tolerance and the dignity of all human beings," he said.

Asserting that his administration is committed to build a world that is more peaceful and secure, Obama said: "That is why we are responsibly ending the war in Iraq. That is why we are isolating violent extremists while empowering the people in places like Afghanistan and Pakistan".

This is the reason why the US is unyielding in its support for a two-state solution that recognises the rights of Israelis and Palestinians to live in peace and security, he said, adding "that is why America will always stand for the universal rights of all people to speak their mind, practice their religion, contribute fully to society and have confidence in the rule of law".

"All of these efforts are a part of US' commitment to engage Muslims and Muslim-majority nations on the basis of mutual interest and mutual respect. And at this time of renewal, I want to reiterate my commitment to a new beginning between America and Muslims around the world," Obama said.

Referring to his Cairo speech, the President said this beginning must be borne out in a sustained effort to listen to each other, to learn from each other, to respect one another, and to seek common ground.

"I believe an important part of this is listening, and in the last two months, American embassies around the world have reached out not just to governments, but directly to people in Muslim-majority countries," he said.

Source: PTI© Copyright 2022 PTI. All rights reserved. Republication or redistribution of PTI content, including by framing or similar means, is expressly prohibited without the prior written consent.
Related News: President Barack Obama, Muslim, US, Muslims, Urdu
Print this article