Statues of living persons can also be installed: Maya govt 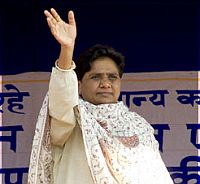 The Uttar Pradesh government, which had made budgetary allocation of crores of rupees for installation of statues of Chief Minister Mayawati and her mentor Kanshi Ram in the state, has said it is a wrong notion that only statues of dead persons can be installed.

The state government expressed dismay over the manner in which the hype is being created over installation of statues of Mayawati and quoted examples of superstar Amitabh Bachchan and former Prime Minister Atal Bihari Vajpayee whose statues have been erected.

"It is a wrong notion that only statues of dead persons can be installed. There is no dearth of examples whether in the country or abroad about statues of living persons. In the Indian context, one can easily refer to A B Vajpayee Institute of Technology and Management, Gwalior and Amitabh Bachchan Institute at Saifai, Etawah," the state government said in an affidavit.

"Abroad we have wax statues of film stars, cricketers and other living personalities finding place in Madame Tussauds museum," the state said.

The Uttar Pradesh government was responding to the petition accusing it of misusing public funds for the installation of statues of Mayawati, Kanshi Ram, other Dalit leaders and that of elephants -- Bahujan Samaj Party's election symbol -- at parks in Lucknow and Noida, adjoining Delhi.

The state government provided details of budgetary allocation for carrying out work at parks in Lucknow and Noida stating that Rs 294 crore and Rs 203 crore have been allocated for the two projects.

"Money has been sanctioned by the state government through budgetary allocations approved by the assembly and every expenditure was authorised by the state legislature," it said.

The PIL filed by advocates Ravi Kant and Sukumar has alleged that state government was misusing the exchequer to glorify Mayawati by installing her statues.

They said statues of living persons should not be installed. While referring to the apex court judgement, the affidavit said, "The judiciary must exercise self-restraint and eschew the temptation to encroach into the domain of the legislature or the administrative or statutory authorities."

Earlier, the apex court had on July 10 cleared the decks for the Uttar Pradesh government to carry out work for installation of statues of Mayawati and other dalit leaders at a park in Noida.

It had refused to interfere in the matter in which the approval has been granted by the state Cabinet.

"If it has been approved by the government, this court cannot interfere," a Bench headed by Chief Justice K G Balakrishnan had said, when an application seeking to maintain the status quo on the works was mentioned before it.

"If the cabinet has approved it, then we can't do anything," the Bench had said.

The Uttar Pradesh government had proposed to install statues of several BSP leaders including that of Mayawati and party founder Kanshi Ram in the gigantic 4-km long walled area along the bank of river Yamuna in Noida.

The PIL had sought a direction to restrain Mayawati from installing her statues and those of elephants at public places with public fund and demanded a CBI probe into the misuse of state funds.