I covered up for Advani on Kandahar, says Jaswant 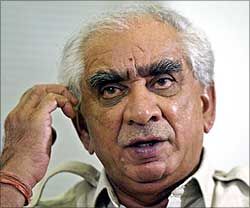 Breaking his decade-long silence, former External Affairs Minister Jaswant Singh on Friday sought to embarrass L K Advani by saying that he "covered" up for him when he said that the former Home Minister was not aware that he was going to Kandahar with three terrorists during the 1999 hijack episode.

He also said Advani was aware of the decision to release the terrorists in exchange for freedom of over 160 hostages kept in the Indian Airlines plane that was hijacked.

"Yes, he did," Singh, who was expelled two days ago from the Bharatiya Janata Party, told NDTV when asked whether Advani knew that Singh was going to Kandahar with three terrorists.

There has been a controversy on the issue with Advani claiming a few years ago that he was not in the know of Jaswant Singh going on a plane with three dreaded terrorists to Kandahar.

Singh was asked why he said during the election campaign that Advani did not know that he was going to Kandahar with the terrorists and whether he covered up for Advani.

"I'm sorry I did," he said when pointedly told that this was a serious thing he was saying that he covered up for Advani.

Singh said he did not reveal this during the campaign. "I tried to cover it. I treated it as part of my continuing sense of commitment and loyalty," he said.

Asked whether he regretted covering for him, Singh said "I don't regret because that is the step I had taken. But it was part of an election campaign. How should I put it? I was being very conservative with truth."

He said Advani could not have not known the decision to fly to Kandhar.

"I announced it in the Cabinet," Singh said.

"How can they (terrorists) be released from prison without the Home Minister consenting and signing pieces of paper," he added.

Singh said he felt very hurt when Advani said what he did and he went. "I went and told him. I was really hurt. Look I have traveled this route to Pakistan in every possible fashion, the Lahore bus, to Kandahar, to Agra, Chhatisinghpura, Parliament attack. But I have never tried to transfer responsibility. I have never spoken, it was very hurtful."

Singh also made a veiled criticism of Advani when he asked why the aircraft was allowed to leave Amritsar because once it left the "game was lost."

"Who would be responsible for the aircraft leaving Amritsar. For 45 minutes the aircraft was on ground at Amritsar. All of you are fixated on Kandahar. I didn't go to Kandahar because there was a good night club there. I went there because 166 lives were involved and the officers there asked me to consult if a decision was to be made," he said.

Jaswant said, "I went and told him what do you want me to say now Advaniji. He said you say whatever you want to."

But when told that during the election campaign he did not actually reveal this, Singh said "No, I didn't. I tried to cover it. I treated it as part of my continuing sense of commitment and loyalty."

Asked whether he would have expected Advani to stand up for him, Singh said, "He (Advani) was not required to cover any misdeed. My going to Kandahar was not a misdeed. And I was not going on a holiday jaunt. 166 lives were involved."

He said it was a sense of commitment to India that required to save whatever another colleague has done.

"You know what the comment means. I didn't know. It's a comment not on Jaswant Singh. It's a comment on Atalji because there is a sense of collective responsibility of the Cabinet. We forgot essentials," Jaswant said.

To a query as to what Advani told him when he confronted him privately, Singh said, "I said Advaniji, what do I say to this. Look, for 15 days I didn't. I was very deeply wounded by it, very deeply wounded. And then in 15 days I went and said what do you want me to say. He said say whatever you want to say. Over."