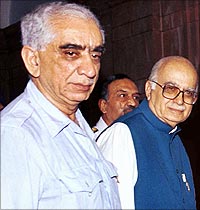 "It is mentally painful to expel somebody who has been with you for the past 30 years but what he wrote was against the basic ideology of the party," he said in his valedictory address at the concluding day of the three-day 'Chintan Baitak' in Shimla.

In his first comments on the party's decision taken on Monday, he told top BJP leaders attending the conclave that he felt that the expulsion of the Darjeeling Member of Parliament as "painful but a necessary" action.

Referring to Singh's statement that Patel had banned RSS and how was he core to BJP's ideology, Advani said that it was at Nehru's behest that Patel banned RSS.

"One month later, Patel wrote a letter to Nehru saying that there is not an iota of evidence against RSS. Jaswant is saying only half of what had happened and not the other half," Advani was quoted as saying by Sushma Swaraj.

"It was not possible by an ordinary person. Jaswant Singh tried to denigrate Patel," he added.