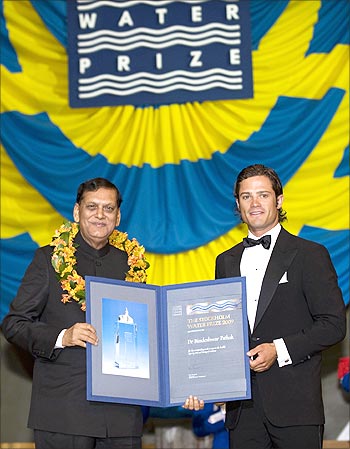 Indian sanitation expert and founder of Sulabh sanitation movement in India, Bindeshwar Pathak has been awarded the prestigious 2009 Stockholm Water prize. The award akin to a Nobel Prize on environmental issues was presented to him on Thursday night by Prince Carl Philip of Sweden.

"If water is honoured by the Prize being named after it, the importance of sanitation, its sibling, cannot be left far behind. The two complement rather than compete with each other," Pathak said in his acceptance speech. "Provision of sanitation provides dignity and safety, especially to women and reduction of child mortality. As a matter of fact, safe water and sanitation go hand in hand for improvement of community health," he added.

Pathak is known around the world for his wide-ranging work in the sanitation field to improve public health, advance social progress and improve human rights in his home nation and other countries. His accomplishments span the fields of sanitation technology, social enterprise and healthcare education for millions of people, serving as a model for NGO agencies and public health initiatives around the world.

Anders Berntell, Executive Director of the Stockholm International Water Institute (SIWI) said "The correlation between sanitation and disease is dramatic and unmistakable.Yet, at the current rate of progress, we are going to miss the Millennium Development Goal for sanitation by more than 700 million people, leaving still 2.4 billion people without adequate sanitation by 2015, about the same number as today," Berntell added.

Pathak and other experts meeting at the 2009 World Water Week in Stockholm explored the causes, health impacts and possible solutions to inadequate sanitation that currently affects more than 2.6 billion people across the planet, kills over 5000 children daily and causes the illnesses that fill half of the hospital beds in the developing world. The topics included manual scavenging, sanitation for the urban poor, financing of sanitation, and the effects that climate change could have on sanitation, among many other subjects.

"The sanitation problem has a complex solution," Jon Lane, Executive Director of the Water Supply and Sanitation Collaborative Council (WSSCC) said, adding "If it was easy it would have been done by now."