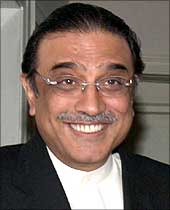 "The thirst for revenge against the former president should be quenched by reconciliation and the Pakistan People's Party government had not ordered the filing of a case against Musharraf, in line with Benazir Bhutto's philosophy of reconciliation," The Daily Times quoted Zardari as saying.

Zardari rebuffed the notion of being a 'power monger', saying he had declined several offers from the previous regime of becoming the country's prime minister. He said he wished to further strengthen relations with Pakistan Muslim League - Nawaz chief Nawaz Sharif, and added that all political parties must shun their differences and adopt the course of reconciliation.

He said the PPP was committed to the agenda of reconciliation. "Whatever the parliament does or says, the government will follow it," Zardari said.

Expressing disappointment over the non-implementation of the Charter of Democracy in letter and spirit, Zardari said the PPP government is committed to implementing the accord as soon as possible.

"Gilani is a very strong prime minister and the party stands behind him," he said.