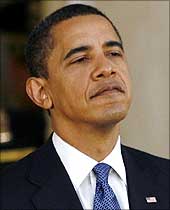 United States President Barack Obama on Tuesday said that the new Af-Pak strategy of his administration recognises that the Al Qaeda and its allies have shifted their base from Afghanistan to the remote tribal areas of Pakistan.

The comprehensive strategy announced early this year also acknowledges that military power alone cannot win the war against the extremists, he said in his address at the Veterans of Foreign Wars Convention in Phoenix, Arizona. The strategy "recognises that Al Qaeda and its allies had moved their base to the remote, tribal areas of Pakistan".

"This strategy acknowledges that military power alone will not win this war -- that we also need diplomacy and development and good governance. And our new strategy has a clear mission and defined goals: to disrupt, dismantle, and defeat Al Qaeda and its extremist allies," the President said.

Observing that Taliban insurgency in Afghanistan would enable the Al Qaeda to plan more attacks like 9/11, he said the war against terror is necessary for the defence of the people.

"This is a war of necessity. Those who attacked America on 9/11 are plotting to do so again. If left unchecked, the Taliban insurgency will mean an even larger safe haven from which Al Qaeda would plot to kill more Americans. So, this is not only a war worth fighting, this is fundamental to the defence of our people," he said.