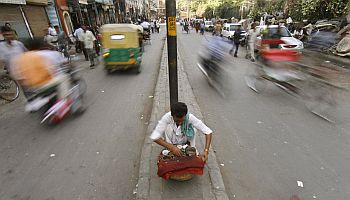 India leads in the annual reported number of traffic deaths worldwide, shows a Global status report on road safety survey by the World Health Organization (WHO). This is a first-of-its-kind global survey on deaths on roads.

The survey was conducted in 178 countries, which account for 98 per cent of world's population. The survey is based on data collection for 2006; it began in March 2008 and was completed in September, with further validation.

Over 1.2 million people die each year on the world's roads, and between 20 and 50 million suffer non-fatal injuries. In most regions of the world, this epidemic of road traffic injuries is still increasing. Road traffic injuries are one of the top three causes of death for people aged between 5 and 44 years.

The survey also predicts that by 2030, road traffic injuries would become the fifth leading cause of death worldwide.

India leads with 1,05,000 traffic deaths in a year, compared with over 96,000 in China. Also, in India an estimated two million people have disabilities resulting from a road traffic crash.

Also, around 62 per cent of reported road traffic deaths occur in 10 countries: India, China, the US, the Russian Federation, Brazil, Iran, Mexico, Indonesia, South Africa and Egypt. These countries account for 56 per cent of the world's population.

The 10 countries with the lowest modelled road traffic fatality rates are almost all high-income countries, including the Netherlands, Sweden and the United Kingdom, said the survey.

To bring down crashes on roads, the survey's suggestions, includes set speed limits that reflect the function of individual roads, a drink-driving law that should be strictly enforced, mandatory laws on helmet use on motorised two- and three-wheelers, seat belts in both front and rear seats of all vehicles and child restraint laws in vehciles.