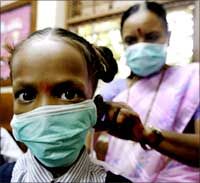 Two women, both aged 27, have succumbed to swine flu in Bengaluru, raising the toll in Karnataka due to the virus to five and across the country to 27.

With this, Bengaluru accounts for the second largest number of flu deaths after Pune, where the toll is 12.

Besides Pune and Bengaluru, one person each has died due to the viral disease in Ahmedabad, Nashik, Chennai, Thiruvananthapuram, Raipur and Bilapur and two each in Mumbai and Vadodara.

Admitted to Baptist Hospital on August 10, Begum was suffering from shortness of breath for the past three months and from cough and cold and fever lately, Medical Superintendent Chandy Abraham said.

She was diagnosed as a patient with cardiovascular problem and signs of early pneumonia but she later showed symptoms of A(H1N1) influenza and her throat swab tested positive on Saturday night, Abraham and a health official said.

Begum, who was in the ICU, showed signs of improvement initially but her condition deteriorated in the last three days, Abraham said.

Shilpa, who was admitted to St John's Hospital on August 12 with complaints of cough, cold and bodyache, died late on Saturday night, the officials said.

They said her throat swab was collected on August 13 and sent for tests. She was put on Tamiflu tablets even before the test reports came, they said, adding that the infection in her case was confirmed on August 14.

The hospital staff members of Baptist Hospital, who came in contact with Begum and her relatives, have also been put on Tamiflu tablets, Abraham said.

Stepping up its efforts to deal with the infection, the Karnataka government had on Saturday decided to rope in 53 private hospitals to fight the pandemic.