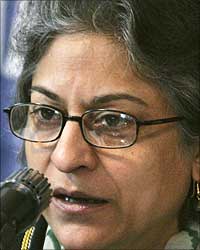 The Pakistan army is running the foreign policy of the country and dictating vital policy decisions as it continued to be in power in the country, Asma Jahangir, the chief of Pakistan's top rights watchdog, has said.

"I dont want to be pessimistic," said Jahangir, the noted Pakistani lawyer and social activist.

"We can deal with it, but we should not only insist on the transition to democracy but democratic forces should deepen the process further," she was quoted as saying by The News daily on Thursday.

Jahangir, the chairperson of the Human Rights Commission of Pakistan, said the military was still in power as it is not only running the foreign policy of the country, but also dictating vital policy decisions.

Apart from ruthlessness of the army that we witnessed in former East Pakistan (now Bangladesh) or were witnessing today in Balochistan, the military didn't even have a clear perception of the major issues that confronts the country, Jahangir said at a lecture on "Democracy and Human Rights in Pakistan: A dead-end."

The noted lawyer regretted that while Pakistan was overspending on external security, it had no funds to ensure internal security and the police was in a bad shape, the report in the Pakistani daily said.

Speaking at the Aga Khan University in Karachi, she said that a media cell was working to improve the image of spy agency Inter-Services Intelligence and advising young journalists "what to write and what not to write."

One of the major obstacles Pakistan was facing today, Jahangir said, was the lack of a leadership. She claimed the civil bureaucracy had been sidelined because the military perceived it to be the only force that could counter-balance it.

Trying to analyse the separatist problem in the restive Balochistan province, the leading rights activist said the seat allocations in parliament for Balochistan was unfair.

"Recently there has been some development work in Balochistan, but it has not been carried out according to the wishes of the people of Balochistan, and the only set of people benefiting from the work are the Pakistan army," Jahangir was quoted by the newspaper.

Source: PTI© Copyright 2023 PTI. All rights reserved. Republication or redistribution of PTI content, including by framing or similar means, is expressly prohibited without the prior written consent.
Related News: Asma Jahangir, Balochistan, The News, Inter-Services Intelligence, FATA
Print this article