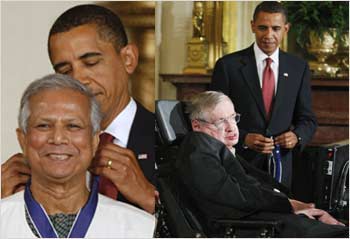 Hawking was awarded the Medal of Freedom in recognition of popular science publications and for making his research accessible to all members of the public.

Yunus, who won the Nobel peace prize in 2006 for his role in poverty alleviation through micro-finance scheme in Bangladesh, has been honoured for altering the face of finance and entrepreneurship.

"This is a chance for me -- and for the United States of America -- to say thank you to some of the finest citizens of this country, and of all countries," Obama said, while presenting them the awards.