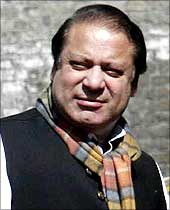 Demanding that Pervez Musharraf be tried for treason, PML-N chief Nawaz Sharif has said the government should play its role in the light of the Supreme Court's verdict on the former President's actions to end the military's interference in Pakistan's political set-up.

In his first comments on the recent Supreme Court judgment on Musharraf, Sharif said "several dictators had hijacked Pakistan because none of them had been tried in the past."

He said the court verdict on July 31 was "historic" as it had declared Musharraf's action as "unconstitutional."

Addressing a gathering of PML-N workers in Dubai yesterday, Sharif urged the government to play its role in the light of the apex court's decision to end the military's interference in Pakistan's political set-up once and for all.

"Otherwise, the masses can force the government to make decisions according to their whims just as they played their role for the restoration of the judiciary," Sharif said, referring to the movement launched by the lawyers' movement and the PML-N that forced the government to restore judges deposed by Musharraf.

He also criticised Prime Minister Yousuf Raza Gilani's recent statment that Musharraf can be tried for treason only if parliament passes a unanimous resolution on the issue, saying it amounted to defending the former ruler's actions.