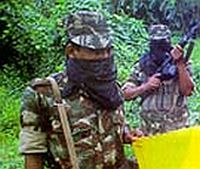 Five secessionist militants outfits based in North East India -- banned United Liberation Front of Asom, Kamatapur Liberation Organisation, Manipur People's Liberation Front, National Democratic Front of Bodoland and Tripura Peoples Democratic Front -- have called upon the people of the North East India to boycott and prevent celebration, in any manner, of India's Independence Day in the region on 15 August, 2009 as a mark of solidarity against 'Indian colonial occupation and military repression.'

In a joint statement issued by these outfits, they also appealed to the people to observe 'general strike' throughout the region from 1:00 am to 6:30 pm on that day.

"In previous years we have observed that despite negative internal factors the liberation struggles in the region are moving ahead while India's 'ceasefires' and 'peace talks' (without any basis for a satisfactory political solution of the conflict) as supplementary means to military repression for defeating the struggles have exposed their own failure. The return of the National Democratic Front of Bodoland to the fold of liberation struggle has set the trend to defeat India's game plan. Now the national liberation struggles should be consolidated, strengthened and intensified while the fragmentation of the region on exclusive ethnic lines under the Indian system should give way to a dialectical process of inclusive unity based on the region's independent existence," the statement said.

"Keeping faith in the collective wisdom and strength of the entire peoples of the region, we once again appeal to our peoples to display their solidarity against the colonial occupation of the region by India, the common enemy, by making the Boycott and General Strike a complete success" the outlawed organisations stated.

Meanwhile, security sources in Guwahati termed the boycott call given by the militant outfits a 'routine practice' before Independence Day which is aimed at deriving publicity. The security forces in insurgency-hit Assam have geared up vigil against the movement of ULFA and NDFB militants following intelligence inputs that both the outfits were out to strike terror in Assam before the Independence Day.