Pak does not wish for prolonged peace in India: Army 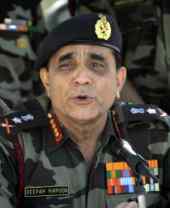 "I find it rather odd that on the one hand Pakistan would like to fight terror, therefore it is moving troops to fight them but on the other hand, it is perpetuating terror by sending in infiltrators into Kashmir," he said.

"I think they are following a dichotomous policy," Kapoor told reporters on the sidelines of a seminar.

About recent spurt in terrorist activities in Jammu and Kashmir, he said, "Pakistan will use any and every opportunity to raise Kashmir (issue), whenever they get a chance. So, I see the increase in infiltration in that context."

"They find things have gone far too peaceful. Amarnath Yatra has passed off peacefully...perhaps they don't wish for this prolonged peace and stability," Kapoor said.

"Hence you see heightened activity, heightened attempts to try to get as many people in before the winters come, snow falls and passes close," he added.

Asked if the Pakistani Army establishment was supporting the infiltration bids by terrorists, Kapoor said, "the kind of sophisticated equipment, to be used during very heavy snowfall and the kind of communications which are available, the possibility of certain amount of support to them by the established institutions can not be ruled out."

Commenting on the allegations levelled by a dead Indian Military Academy cadet's family that his body was handed over to them in a decomposed state, the Army chief said, "We will look into their charge".

"We try to ensure that anyone who dies during training or during operations gets full respect," he said.