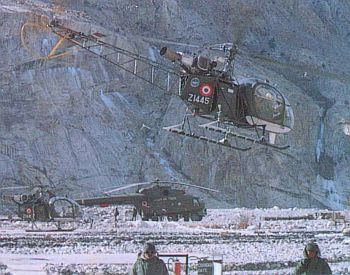 Dodging enemy rockets and missiles, this pilot flew his Cheetah helicopter for a record period to carry out multi-role sorties as a spy, a workhorse and a saviour for injured soldiers during the Kargil War.

Col Shantanu Kashyap went through the smoky skyline and over rocky battle fronts and inhospitable terrains rattled by mortars, rockets and stringers missiles on May 28, 1999 in Tololing sub-sector for 8 hours and 10 minutes.

"Flying in Kargil heights had all sorts of records and bitter memories. I flew for 8 hours and 10 minutes in a day which is a record in India's aviation history," Col Kashyap said.

According to aviation guidelines, we can fly and undertake sorties for five hours a day at the maximum, he said.

"We had to carry a particular load of two injured soldiers. But taking risk, we used to carry three injured persons. It was most emotional and heartening situation for us," he said, adding most of whom they picked from the battleground were saved.

Recalling his experiences, he claimed he was the first pilot to fly to Tololing to "conduct reconnaissance and observation over the heights captured by Pakistani regulars".

The Leh-based 666 AA Squadron, one of the most decorated aviation wings of the army, and the Srinagar-based 663 Squadron flew hundreds of sorties besides securing heights in Kargil, Batalik, Mushkoh and Drass sub-sectors during the war.

"When the first IAF chopper MI-7 was shot down by the stringer missile in Tololing, the IAF formation head asked me to undertake a sortie to the wrecked area. With Stringer missiles dotting along the Tololing ridge line, I flew to the area and carried out the recovery and rescue mission.

"Men and machines of AAC proved to be spies of Indian infantry, eyes of the artillery, workhorses of the troops who fought in high altitude peaks during the war," he said.

Popularly known as leopards of the AAC, they have multi-role tasks including gunning of enemy positions, directing artillery fired on enemy observation posts, airlifting troops and bringing the injured from inhospitable battle terrains, dropping of ammunition, food, water to the jawans on the battle ground.

"We could hardly change cloths and had to stay at places out of the view of Pakistani gunners," he recalled.