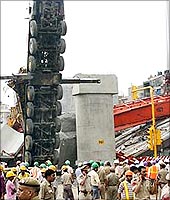 Holding the lack of professional ethics responsible for the Delhi Metro accident, its Managing Director E Shreedharan has asked technology institutions to inculcate national values through their curriculum.

There were deficiencies in design due to lack of ethics which caused the incident, he said, and emphasised the need for imparting values and ethics to students while they are learning.

"Should we not educate and warn the engineers and scientists coming out of the technical institutes that professional ethics and values should not be compromised for short-term business advantage," he said while addressing a convocation of Indian Institute of Technology  in Mumbai.

"The design of a cantilever pier is not a complex exercise and it was lack of professional ethics which led to the deficient design," Shreedharan said.

"I am making this suggestion based on my long professional experience and particularly in the context of the tragic accident that took place in Delhi Metro on July 12, when a cantilever pier under load collapsed, resulting in the death of seven workers and injuries to 16 others," he said.

A high-level technical committee came to the conclusion that the collapse was due to serious design deficiency, he said, adding the structure was designed by a well known structural consultancy and was being constructed by one of the best known civil contractors of the country.

Addressing the IIT students, the veteran civil engineer, who is also credited with the success of the Konkan Railway, said that in his long professional career of over 56 years, "I have learnt that to be successful in professional life one must have certain attitude and commitment to values."

The Delhi Metro MD advocated to the students that it was necessary to have reasonably good health throughout their life as health is wealth and asked them to have moderate, balanced food habits, adequate sleep and regular exercise.

"None of these costs any extra money nor will need a good deal of your time and this is only a habit you have to cultivate and make it part of your life," he said.

He said there are several challenges facing the nation including corruption and these are challenges that institutions like IIT have to face.