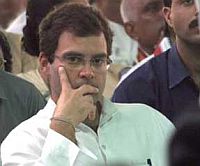 Gearing up the party for 'Mission 2012' of coming to power in Uttar Pradesh, Congress leader Rahul Gandhi on Thursday directed his lieutenants to take on Mayawati government on the issue of development while harping on mobilising youths to reach out to the common man.

"The fight of Congress is not with any political party. We should concentrate on connecting with the people by raking up issues of development and reaching their homes in times of grief and celebrations," Gandhi was quoted as saying at a meeting of party's state coordination committee in Lucknow.

Rahul asked party cadres "to initiate a new type of politics, which is in the interest of common man. While utilising experience of old hands, youths should be equally involved in the process of strengthening the party", according to Uttar Pradesh Congress Committee chief Rita Bahuguna Joshi.

It was the fifth meeting of the coordination committee, which deliberated on future plans and analysed the results of Lok Sabha polls, where the party surprised many with its impressive performance, bagging 20 out of 80 seats in UP.

Criticising the Mayawati government on the handling of drought situation in the state, Joshi said a resolution was passed asking the state government to properly utilise funds meant for the purpose.

"Instead of spending money on statues, the state government should spend money on drought hit people. We demand immediate exemption of realisation of dues from farmers and fees from students as well as effective implementation of central schemes in the state," Joshi said.

Image: Initiate a new kind of politics, says Rahul Gandhi (in the pic)