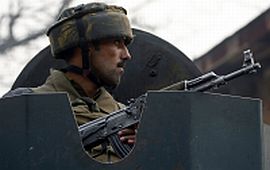 Security forces have killed three militants in north Kashmir's Bandipore district on Friday, even as the gunfight is still on in the thickly forested area.

A senior police officer said that security forces cordoned off Vewan forest area in the upper reaches of Bandipore district on Friday, following information about the presence of a group of militants inside.

"The hiding militants started firing at the surrounding troops after being challenged. In the ensuing gunfight which is still on, three militants have been killed," Bandipore district police chief Sheikh Junaid told rediff.com.

"We have halted the operation because of heavy rains and darkness. The operation will be resumed with the first light on Saturday morning," Junaid added.

The cordon around the encounter site has been further tightened, he said.

North Kashmir areas along the Line of Control have witnessed three fierce gunfights between militants and security forces this week.

While foiling three infiltration bids from across the LoC, security forces have killed six militants.

Massive searches are still on in the areas.