News
Business
Movies
Sports
Cricket
Get Ahead
Money Tips
Shopping
Sign in  |  Create a Rediffmail account
Rediff.com  » News » What will you gift President Obama on his birthday?

What will you gift President Obama on his birthday? 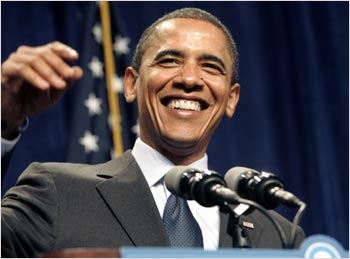 However, instead of taking a day off, the world's most powerful man prefers to have lunch with Senate Democrats at the White House.

According to media reports, they are likely to discuss health care, the economy, energy legislation and the so-called 'Cash for Clunkers' programme that would provide federal vouchers of up to $4,500 for people to trade in their vehicles for new ones that get better mileage. Now that's quite an agenda on your birthday, Mr President!

With his approval rating edging back up to 56 per cent in the last three days from a low 52 per cent in the middle of the last week, Obama could not have asked for a better birthday present.

An interesting thought on his birthday is, what kind of gift can one give the world's most powerful leader? World peace? Economic recovery?