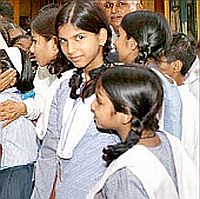 Parliament on Tuesday passed a landmark education bill that gives children, including the disabled, the fundamental right to free and compulsory education.

The Right of Children to Free and Compulsory Education Bill seeks to provide education to children aged between 6 to 14 years.

For disabled children, the upper age limit for receiving free education has been relaxed till 18 years.

The bill, one of the flagship programmes in the 100-day agenda of the United Progressive Alliance government, also earmarks 25 per cent seats to weaker sections in private schools.

Activists have been claiming that autistic children were not covered under the draft legislation and had approached Prime Minister Manmohan Singh and Congress President Sonia Gandhi in this regard.

Replying to the debate on the bill, Union Human Resources and Development Minister Kapil Sibal said the bill covers children with disabilities and was planning to set up special schools for them.

"This bill provides for the inclusion of children who are disadvantaged because of disability. The government is not only setting up special schools for them but doing all to provide education to them in all types of schools," he said.

The Rajya Sabha has given its nod to the bill earlier.

"We as a nation cannot afford our children not going to schools," he asserted, noting that the measure details the obligations of the Centre and the states for providing free and compulsory education to children.

The bill also seeks to do away with the practice of schools taking capitation fees before admission and subjecting the child or parents to any screening procedure.

Sibal said it would be up to the states to implement the policy of reservation in admissions.

Responding to members' concern on the financial requirement of the gigantic task, he said a group was on the job which would provide inputs to the 13th Finance Commission before completion of its term in October this year.

The bill seeks to achieve ten broad objectives which include free and compulsory education, obligation on the part of state to provide education, nature of curriculum consistent with Constitution, quality, focus on social responsibility and obligation of teachers and de-bureaucratisation in admissions.

The bill also provides for building up of neighbourhood schools in three years by the states.

The minister said the definition and location will be decided by the states. On absence of penal clause under the bill for parents not sending their children to schools, Sibal said, "We do not have the right to send such parents to jail and make their children orphans."

At UN, India abstains from vote over Pak angle