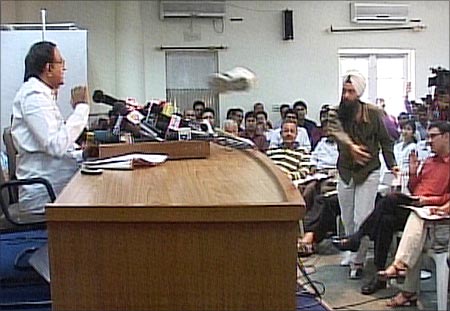 Months after an infuriated Iraqi scribe flung a shoe at US President George Bush, an angry journalist -- apparently upset over Congress leader Jagdish Tytler being given a clean chit over his alleged role in the 1984 anti-Sikh riots -- flung a shoe at Home Minister Chidambaram during a press conference in New Delhi on Tuesday.

The shoe, however, missed the target.

Chidambaram, who was addressing a press conference at the AICC headquarters, was surprised when suddenly Jarnail Singh, journalist from a Hindi daily, flung the shoe and an alert Home Minister made a quick movement to see it pass by him.

Police said he was freed after a brief detention.

Station House Officer of Tughlaq Road Police station Anil Kumar Yadav told reporters that the scribe has been freed for the time being.

"No case has been registered against him. He has regretted about his action," the official said, adding that the journalist was questioned for his action and then he was released.

After being freed, the Sikh journalist said the issue that he raised was a  appropriate issue and the victims should get justice.

"Maybe my way of protest was wrong," said the scribe who later left with his journalist friends and Sikh supporters.

Meanwhile, Sunita Tiwari, who claimed to be his lawyer and had come to meet him at the police station, alleged that she was not allowed to talk to her client.

"I was misbehaved with. The SHO asked the constables to take me out of the room. I wanted to talk to Jarnail as he was mentally disturbed," she said.

"Please take him away," said Chidambaram who later added "gently, gently" as the journalist was escorted out of the press conference hall. Later, he was taken away by police but it was not clear whether any case has been registered against him against the backdrop of Chidambaram saying, "I forgive him."

As the action caused a flutter in the hall, a composed Chidambaram appealed to reporters, "Let not the action of one emotional person hijack the entire press conference. I have answered his questions to the best of my ability."

It all started with the journalist asking him about the clean chit given by CBI to Tytler in the 1984 anti-Sikh riots case under pressure from the government.

"The CBI has only given a report to the court. It is for the court to accept or reject or ask for further investigation by CBI. Let us wait for the court decision," he said.

As the journalist persisted with his questions, Chidambaram told him, "No arguments, you are using this forum..." following which the journalist hurled his shoe.

Singh said he will not apologise for his action, though his manner of protest might have been wrong.

"My manner of protest might have been wrong, but I did not intend to hurt anyone," he said.

Asked if he could have used some other manner to protest, he said, "For the last 25 years this has been happening. So what other method is left (to protest)."

Earlier this month, CBI had given a clean chit to 1984 anti-Sikh riots accused Tytler and sought permission from the court for the closure of the case against the Congress leader.

Image: A video grab of the shoe-throwing incident.