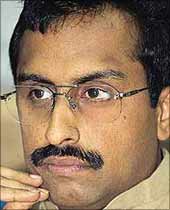 The Rashtriya Swayamsevak Sangh, which heralded the movement of Ramjanmbhoomi temple through the Vishwa Hindu Parishad, is happy with the Ayodhya judgement of Lucknow bench of Allahabad high court but is showing restraint in its public utterances. They know triumphalism will mar the positive elements of the judgement.

In an exclusive interview with rediff.com's Sheela Bhatt, RSS's executive council member Ram Madhav emphasised on using the judgement for strengthening national integrity but avoided agreeing to building a mosque and a temple at the same site.

This judgement seems to have divided the country once more.

We consider the judgement as a wonderful opportunity to come together and facilitate building of a great temple in Ayodhya. Far from dividing the country the judgement will help us come close, again. We request all Indians including our Muslim brothers to follow the spirit of the judgment and help build a Ram temple. The rest of things can be discussed.

Do you find judgment more than your expectations?

Our stand has been consistent that a matter of faith is better solved outside of the judicial purview. We never had any expectations, per se.

Having said it I will only add that all the points we used to raise including the fact a temple was demolished before construction of a mosque and the fact that Ram was born there and the presence of a Ram Lalla temple and ownership of the Deity Ram has been accepted by the court in its verdict.

There are critical comments about the issue of giving legal endorsement to the precise place where Ram was supposedly born thousands of years ago. How will an educated and scientific mind accept it?

I hope you are not saying that judges are not educated or do not have a scientific mind.

Of course not! This comment is for sake of argument and understanding.

Let me answer your question. I think you have not read the judgement.

What would be the long-term effect of the judgement?

What is the spirit of the judgement?

The spirit of the judgement is that there was a temple before the construction of a mosque, there was a deity of Ram Lalla and crores of Hindus historically believed that place to be the birthplace of Ram. Ram Lalla should be allowed to continue at that place and that the central (central dome of the demolished mosque) area should be given to Hindus.

If everybody accepts these parts of the judgement then other issues can be easily be sorted out through discussion. It will pave way for greater integration and a strong Bharat. The only rider is that we all should accept the theme of the judgement.

So, you obviously don't see it as a judgement of faith or as some say panchayati-style justice.

You know people are free to criticise the judgement. As far as we are concerned the judges have scrupulously gone into the matters referred to them. They have gone by the evidence put before them. There were witnesses, archaeological and historical evidence. It's a well-thought out judgement. There are certain grievances but that can be addressed. Just look at the nation's response.

But there is a strong feeling that this is more like a compromise and a kind of arbitration.

It's a clever statement by you. Now, that you have won you are saying so. All these years you never believed in court verdicts in matters like this. Now you are demanding that everyone should respect the court verdict. That's opportunism.

All of you were nagging us to respect the judgement before it came. Now, we are respecting it, you still have a problem. If this judgement had gone against us you people would have sat on our throat to force us to accept it. Now that it has come in our favour we are saying let's accept it to move India forward. What's your problem? This is weird logic when we are accepting the judgment. We always maintained that issues like faith are better settled outside the purview of the courts. We said that legislation is a better option.

Some people are now afraid that there could be anarchy if any movement is launched for Kashi and Mathura.

But you know there is a law called Places of Worship Act 1993. Which categorically says that the status quo of August 15, 1947 applies to every other places of worship accept Ayodhya. Which court would accept the case for any other place of worship, tell me? But you can't stop anybody from approaching the judiciary.

So what should be the action plan for creating a platform for reconciliation between Hindus and Muslims in the Ayodhya case?

First and foremost, it should be left to the parties concerned. We and even the media should keep off. They are capable people on both sides. Let them talk.

One hurt that Muslims have is that indirectly or unknowingly the judgement is diluting the demolition of Babri mosque in 1992.

See you can't be selective in history. The first demolition was in 1528 followed by several events. That's why RSS chief Mohan Bhagwatji has said clearly that let's not waste this opportunity by looking back at what happened in history.

I must tell you if you talk about history, one group has one grievance, the other group has other grievances. So let us overcome our historical grievances and take this opportunity to unite. Please don't be selective about history.

You can't talk about 1992 only. Then, talk about different dates. In this particular case you have to start from 1528. The judges have started seeing things in the case from 1528. But now we say look forward. Why can't you stop seeing the judgement merely as a Hindu and Muslim issue?

See it as the case for national unity.

What kind of feedback you have got from all over the country?

There is a widespread sense of happiness and relief that finally we have reached a good conclusion. Now it's time that we all come together and move ahead respecting the spirit of the judgement. I must tell you I have got responses from Christians and Muslims too. They say that let temple come up now. Leave behind this issue and discuss the issues concerning our country.

Do you acknowledge that there is a feeling of disappointment among Muslims?

Certain sections will always be disappointed. But I would say broadly the country is satisfied.

Okay. So you think, on one third of land that Muslims have a mosque can be built and in the rest of the land a temple can be built, right?

That question regarding the one-third land will have to be asked to Muslim parties. What they want to do you better ask them. Some of them are saying they don't want it. Our view doesn't matter in this.

Yes, but you don't have any problem if mosque and temple co-exist which is in the spirit of this judgement?

You have not read the judgement. The spirit of the judgment is what I have said few minutes back. The one-third of land is given to the party whose plea is dismissed. It's dismissed by a judicial authority. It is a legally untenable judgment!

I am not going to comment on that because land is given to the party that doesn't want it. They have said it. I am saying that they don't want 33 percent of land given to the Sunni waqf board. Their case for title of the land has been dismissed. It's a tricky legal issue.