News
Business
Movies
Sports
Cricket
Get Ahead
Money Tips
Shopping
Sign in  |  Create a Rediffmail account
Rediff.com  » News » 'Caste inclusion in census will be a disaster'

'Caste inclusion in census will be a disaster' 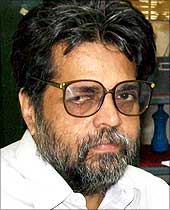 Professor P Radhakrishnan is a social scientist of repute and an expert on caste and reservation in India. He was with the Madras Institute of Development Studies till recently. In this interview with Shobha Warrier he talks about the dangers of including caste in the census.

Caste is a reality in India. Political parties are formed on caste. Reservation is based on caste. What more harm can the inclusion of caste in the census cause to the society?

No doubt, caste is a reality in India. But in many places it is not the same reality as it existed traditionally. As an institution that has survived for about 3,000 years, caste has undergone many changes. There were many agitations too against the caste system as it is intrinsically divisive, discriminatory, and oppressive. The Indian Constitution was framed against the background of the full knowledge of the persistence of this evil allowing it to gradually wither away or have a natural death. As a result, the traditional caste has, to a large extent, been driven underground over the years after India became a secular democratic republic.

If caste is included in the census, it will come back venomously with the vengeance of its suppression for about 60 years, which will be a disaster.

Caste was in the public domain during the British administration mainly because of its divide and rule policy and partly because of its patronage politics. India's independence brought about a major policy shift in the State's approach to caste. That is evident from the Constitution.

Reservation at present is based on data collected years ago. So, won't a caste-based census help identify those in need of reservation?

The general perception that reservation should be caste-based and castes are entitled to reservation is fallacious. From the perspective of the Constitution, and of related Indian jurisprudence till recently, reservation should not actually be caste-based -- except in the case of Scheduled Castes -- though for purposes of identifying backwardness caste groups and corresponding groups in non-Hindu religious communities are subjected to the backwardness tests.

How will the government then proceed with reservations?

The government can do it in at least two ways: By following the constitutional provisions for the purpose (Article 340); and by evolving neutral criteria which might have existed as negative attributes of the traditional caste system whose persistence, as I said earlier, may be disabling, discriminatory and debilitating to individuals from certain castes and communities.

In fact, each state has plenty of rich data on social backwardness. If the states are not willing to process and publish these data it is for fear that the creamy layers which now gobble up the benefits of reservation will be affected and the benefits will go to the really needy.

Why did the British think of stopping caste-based census after 1931?

It became an unwanted burden on the officials to collect enormous data on hundreds of castes at exorbitant cost to the government. The British also realised that caste-based census did more harm than good as the data collected was not reliable, and the census reports caused a lot caste-spite and encouraged 'caste patriotism'.

As a sociologist, do you think with economic development, social development will follow?

Caste has come into the forefront with more vigour now with each political party using caste and reservation to garner votes. Do you hold politicians responsible for the current situation?

By the time the Constitution came into being, every caste group had become aware of the importance of caste and numbers in a democracy. India was the only country in the world that introduced universal adult franchise at one go. More than two-thirds of the population was illiterate at that time. At the time of elections, different groups of cognate castes came together, formed what may be called a 'horizontal stretch' and started exercising their numerical power. So, despite illiteracy adult franchise gave a new lease of life to caste groups.

In 1953, the first backward commission -- the Kaka Kalelkar commission -- was appointed. The commission submitted its report in 1956. At the last minute, the chairman of the commission himself felt that the recommendations of the commission would go against the well being and future of the nation; and wrote as much in his forwarding letter. The government saw wisdom in his letter. Prime Minister Pandit Jawaharlal Nehru and Home Minister Sardar Patel were vehemently opposed to have anything to do with caste in any state policy other than in the case of the Scheduled Castes.

After considerable debate at the Centre, the government wrote to all state governments that while they were free to introduce reservation preferably using economic criteria, the Centre was not acting on the recommendations of the report. Then the states started appointing backward class commissions and introducing reservations. This led to violent caste clashes in states like Bihar and Gujarat.

What is envisaged in the Constitution is not caste-based reservation as such but ameliorative measures for the advancement of individuals from traditional caste groups who continued to be victims of the persistence of the traditional disabling, discriminatory and debilitating attributes of the caste system. Obviously the problem, the reality was too complex to perceive, let alone address.

But the reality has been made different by politicians. Have they not used reservation for vote bank politics?

Caste-based reservation came handy for vote bank politics; and politicians have been mobilising various caste groups using reservation as a rallying point. In the process of mobilising caste groups, they make promises. Caste groups also demand many things, caste-backwardness became a convenient tool in the context of reservations and nobody is willing to look into the reality.

What will the United Progressive Alliance government gain by introducing caste in the census other than appeasing some political parties?

It is not the government alone that is accountable. Here, the role of judiciary is crucial. If the reservation issue has been derailed over the years, become messy and politicised, it is primarily because of the judiciary. The response of the judiciary has been one of knee-jerk, particularly after the Supreme Court rulings of November 16, 1992, in the Mandal case, which I thought were pragmatic.

If caste was excluded from the census since 1951 it was obviously for well-conceived policy reasons. These reasons are available in different documents of the home ministry. It is deplorable that neither the judiciary nor the home ministry has shown any historical sensitivity to the 'caste-in-the-census' conundrum. In fact, the home ministry should have come out with a white paper on the whole issue from 1951 to 1991 covering the views of Nehru, Patel, Indira Gandhi, Rajiv Gandhi, and so on.

If you have closely follow the caste-in-the-census debate what you see is the Yadav trio holding the nation to ransom, stating that if caste is not included in the census the UPA ministry will collapse.

So do you think the Group of Ministers' decision on the caste census is yet another cat-and-mouse game in Indian politics?

My 'gut-level' assessment is that there will be no caste census. Phase 1 of the census is already in progress. Though the Group of Ministers reportedly decided to have caste enumeration in the second phase of the census along with UID (Unique Identification) number project that may not happen. The government is under pressure to stop this project as there are apprehensions that the data collected can be misused. That apart, the project cannot be a one-time affair; it has to be a continuous process. If the fate of the voter ID cards project is any indication, the UID project may be a non-starter; and even if data collection is possible the data can transmogrify India's demographic characteristics. Let us admit that we are way behind e-governance, and India is not Infosys.