News
Business
Movies
Sports
Cricket
Get Ahead
Money Tips
Shopping
Sign in  |  Create a Rediffmail account
Rediff.com  » News » 'The LTTE that we knew can never re-emerge'

'The LTTE that we knew can never re-emerge' 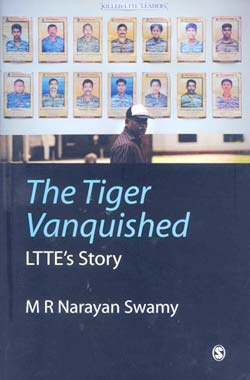 While Sri Lanka's victory over the Liberation Tigers of Tamil Eelam led to many books written about the military operations and the State's side of the story, not much was known about the goings on within the LTTE in what would be the last months of the civil strife in the island nation.

A year after the war, journalist M R Narayan Swamy, who has written a biography of LTTE leader V Prabhakaran previously, come out with exactly that.

His new book, The Tiger Vanquished: LTTE's Story (Sage Publications, Rs 325) goes into the details of the circumstances that led to the decisive Eelam War 4. The book also speaks on India's covert role in trying to bring peace and then later, in helping the Sri Lankan military in the war against the Tigers.

In this interview with Rediff.com's Krishnakumar Padmanabhan, Swamy, who has covered Sri Lanka for Agence France Presse and the Indo-Asian News Service, talks about the LTTE's -- and Prabhakaran's -- mistakes in the build up to the war, and how the organisation dug its own grave.

We have heard a lot about how the Sri Lankan military's positive and aggressive approach was crucial in winning Eelam 4. Tell us something about how the LTTE saw the offensive and its build up.

Till the end of 2008 and even after Kilinochchi fell at the dawn of 2009, the LTTE was confident, and smug, that somehow and some day the military offensive would be blunted or halted, mainly due to Western and, if possible, added Indian pressure.

But for once, Sri Lanka would have none of it. India did not ask Sri Lanka to stop the war on the LTTE, and Western pressure, whatever it was, did not work.

In any case, during the last few years of the LTTE's existence, the Sri Lankan State had turned into a LTTE of sorts -- believing that just as only a diamond cuts a diamond, only an LTTE would be able to destroy the LTTE.

The first three conflicts ended with some gains or the other -- mostly big -- for the LTTE. Where did they go wrong in the fourth war?

The LTTE failed in its basics -- politics. No war minus politics can be won, more so if the war is being waged by a militarily inferior side.

Also, the LTTE made gains in earlier wars because none of the previous Sri Lankan governments were ready to take the risks the Mahinda Rajapakse government did vis-a-vis the LTTE, by launching an all-out war regardless of the consequences, humanitarian and diplomatic.

This the LTTE did not anticipate. It thought history would repeat itself and someone or circumstances would come to its aid. That did not happen. In other words, the LTTE was not ready for the war the Rajapakse brothers waged.

It was a war where there could have been only one winner.

The Tigers cannot really complain since the LTTE provoked Sri Lanka from November 2005.

What actually made Prabhakaran start these attacks post November 2005?

Prabhakaran's calculation must have been that the peace process that began in 2002 had outlived its usefulness and it was time to reignite the war for Eelam.

My calculation is that he would have started the war at least a year earlier but for the unexpected tsunami (on December 26, 2004).

Since the LTTE chief asked Tamils to boycott the presidential election of November 2005 fully knowing this could only benefit the 'Sinhala hardliner' Rajapakse, it was clear he had a plan -- let the hardliner win, let the 'peace monger' Ranil Wickremesinghe lose, let the Sinhala-Tamil divide widen, let there be violence, killings and counter-killings, and the LTTE could then tell the international community (read the West) that there had to be an East Timor or Kosovo in Sri Lanka's northeast. But the script went horribly wrong.

When and how did India's hands-off role in the conflict begin to change?

The 1991 killing of Rajiv Gandhi could have only forced a stunned and numbed India to wash its hands off Sri Lanka. But it is equally clear that this could never have been a permanent fixture.

As Sri Lanka's only neighbour, there was no way New Delhi could forever detach itself from a conflict that was slowly getting internationalised, in part due to the LTTE.

However, it was the advent of the Bharatiya Janata Party-led National Democratic Alliance government that led to New Delhi's energised and renewed pro-activeness vis-a-vis Sri Lanka. Once the process started, there was no looking back.

You write of how the Research and Analysis Wing stepped in instead of the usual back channel diplomacy. How did that happen?

R&AW is not an autonomous republic; it is a part and parcel of the Indian government.

By the time the Norwegians got involved in Sri Lanka, R&AW had been following the various dimensions of the Sri Lankan conflict closely, as indeed it should.

Involving R&AW in the events leading to the 2002 CFA (ceasefire agreement) in Sri Lanka made sense since this could be done quietly, without public knowledge.

In any case, involving an intelligence agency helps in the deniability factor. You can always deny the government is involved. This is one reason why so few people knew about R&AW's involvement in the peace process.

What was the agency's mandate vis-a-vis the peace process?

From what I gather, the mandate was to bring peace. In other words, it was assessed (in the late 1990s) that since the Sri Lankan State did not appear to be in a position to militarily overcome the LTTE, the Tigers could be locked up in a peace bottle. That is what happened -- for a long time.

Would you say India explored all the other peaceful options before giving covert support to the Sri Lankan military?

It is difficult to answer the question with a definitive yes or no since I may not possess all the information related to the subject. But it is clear that at a certain point of time after the Congress took charge in New Delhi in 2004, India felt that the LTTE could not be allowed to grow unchecked in Sri Lanka's northeast any more.

The growing involvement of certain Western powers in the peace process and vis-a-vis the LTTE was also a matter of concern. In any case, the LTTE was again looking like an entity that desired war.

Since India could not openly help the Sri Lankan State, covert support was the only answer.

On balance, is India to be blamed or did Prabhakaran not leave it with any other option?

I would give Prabhakaran the maximum credit for the LTTE's destruction. While he is the one who gave birth to the LTTE and built it brick by brick, his non-compromising attitude led to his own demise with terrible, long-term consequences for the Tamil community.

If Prabhakaran had really wanted peace, he could have achieved a lot. Privately, even the Norwegians complain today that they had handed a federal solution on a platter to him, but he trashed it.

Recent reports say the LTTE is regrouping. What according to you has happened on that front in the past year?

I am convinced that the LTTE that we knew can never re-emerge, come what may, tomorrow or the day after.

The militarism the LTTE came to represent can never again be replicated.

Ordinary Tamils, as opposed to those who live in the West, are completely opposed to any war or violence because it is they who have paid a terrible price for these many years of bloodshed.

Yes, LTTE remnants are there, and some may well want to regroup. Let us give Prabhakaran the due he deserves: he was their glue, their god, their edifice, their inspiration, their ideology, their hope, their prayer. He doesn't exist any more.

Since May 2009, I have spoken to ex-LTTE cadres, the foot soldiers. They are disgusted. If you ask them, they say that a quarter century of killings has left the Tamils on bended knees. They don't even possess today what they had in 1983, when it all began.

Also, in the past one year, more and more revelations have come out about the way the LTTE functioned all these years and how it crushed the Tamil community from within. There are chilling truths.

What is the current situation of the Tamil people?

The Tamil people are facing a dilemma they would have never thought they would have to face one day. They know the war is over, the LTTE has lost it horribly, and the Sri Lankan State has won it decisively. This understanding also has certain ethnic connotations.

Today, the Tamils are seeking peace and dignity. They also need economic development, particularly in the north and east of Sri Lanka. The community has also paid a horrific price in the process of allowing the Sri Lankan State to crush the LTTE.

What has India been doing in the last year?

India has been quietly and not so quietly engaged in wide-ranging efforts to help Sri Lanka rehabilitate communities badly hit by the long-drawn war. It has interacted closely with Colombo in this matter.

Unlike sections in the West, India has realised that constantly and publicly harping on atrocities in the battlefield is not going to help those who are living.

Even if you want something to take place on that front, or to empower Tamils politically, you need the Sri Lankan government to listen to you. And this cannot happen if you live in a world of confrontation.

What should the Indian government do in the immediate future on the humanitarian ground and on the strategic side?

While many Tamils are angry with India for what it did and did not during the war that led to the LTTE's destruction, many, many Tamils still look to India for a better tomorrow.

But India cannot and should not confine its humanitarian and rehabilitation as well as rebuilding activities only to the Tamils. The war affected everyone, the Muslims and Sinhalese included.

Strategically, the Indian and Sri Lankan governments still see eye to eye on many issues even if there are obvious differences. I am not one of those who is going to lose sleep over China's clout in Sri Lanka.

India will have to deepen its links with Sri Lanka. The red line for India will be breached, strategically, if Colombo allows the Pakistanis and Chinese to operate in the north and east of the country, a region that borders India.

Also Read: How the Lankan army crushed the LTTE

'Replicating the LTTE is near impossible'

How the Lankan army crushed the LTTE