News
Business
Movies
Sports
Cricket
Get Ahead
Money Tips
Shopping
Sign in  |  Create a Rediffmail account
Rediff.com  » News » 'Blame the Left govt for the surge of extremism in Kerala'

'Blame the Left govt for the surge of extremism in Kerala' 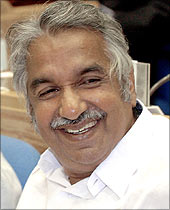 The Popular Front of India is behind the chopping off the palm of Professor T D Joseph, the Malayalam professor of Newman's College, Thodupuzha recently, says former Kerala chief minister and the Leader of Opposition in the Kerala Legislative Assembly Oommen Chandy. This is the first time a Congress leader is talking openly about the Islamic outfit's role in the gruesome incident that sent shockwaves across the country.

In an interview to rediff.com, Chandy blames the Communist Party of India (Marxist)-led Left Democratic Front Government for the surge in extremist activities in Kerala.

Excerpts from the interview:

Kerala is now in news -- both nationally and internationally  for the alarming rise of extremist activities. As a former chief minister and the Leader of Opposition and what is your take?

The Congress is totally against all sorts of fundamentalism and extremism and as a leader of the Congress in the state, I totally disown all sorts of such activities .I do find that a section of the youths are getting carried away to such extreme activities and I put the blame solely on the Left Democratic Front government in the state for the increase in religious extremism.

Religious extremism, especially belonging to the Muslims, has gathered momentum in the state after the Left Front government came to power in May, 2006.  The "mother of all terror activities" in the country was the camp conducted by the erstwhile activists of the Student Islamic Movement of India (SIMI) in Panayikulam ,Aluva on August 15,2006 . The police arrested the persons who took part in this camp which was in the nature of anti-nationalism. However, interference from the top has resulted in the letting off of the people. The arrest of several terror operatives from various parts of the country after the series bomb blasts in different parts of the country revealed the fact that this camp was in fact the one which had planned for almost all these operations through out the country. This shows how callous our police setup is.

The Kerala police could ascertain that there was a camp at Wagamon in Idukki in which several extremists had taken part only after four Keralite youths were shot dead while trying to cross to Pakistan-occupied Kashmir. The documents seized from these youths revealed of the Wagamon camp and till then Kerala police did not have any clue about the case.

Do you subscribe to the theory that the government is interfering in the day-to-day affairs of the police?

What else can one infer? The dreaded terror operative T Nazir who was arrested in Bangladesh and was charged in several cases including the Bangalore blasts, has revealed that he was arrested in Ernakulam by the Kerala police in a murder case. He had told the investigating officers that he was let off by the police. This clearly shows that the CPI-M had a weak policing policy, suiting the party's whims and fancies

Are you saying the CPI-M is having some sort of ties with certain terror organisations?

So who is behind the attack on Prof Joseph, whose right palm was chopped off.

The Popular Front of India is behind the incident. The Congress and the United Democratic Front were not using name (publicly) of this organization earlier as it would have affected the ongoing investigation process .As the police has now come out with some facts, I do assert that the Popular Front of India (PFI) activists are behind this drastic incident which should not have happened in a state like ours where communal harmony has been practising for ages.

Does this affect the morale of the Muslim community?

In this context, I would also like to mention the fact that something written by Prof Joseph, considered blasphemous to a section of the people, is not the handiwork of Christian community.