'Majority of Congress in AP is with Jagan' 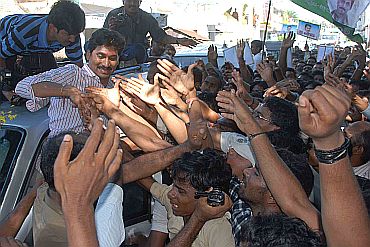 The much-talked about 'Odarpu yatra' undertaken by Jaganmohan Reddy, Congress Member of Parliament from Kadapa and son of former Andhra Pradesh Chief Minister Y S Rajashekhara Reddy, has created quite a stir all across the state.

It appears that the Congress in the state is all against the rally, thanks to the diktat of the party high command, which did not approve of it.

However, the Jagan camp has repeatedly being saying that it enjoys the support of most of the state Congress leaders and it is just a matter of time before they accept Jagan as their leader.

In this backdrop, an important member of the Andhra Pradesh Congress says that Jagan enjoys 90 per cent support in the party. Gadikota Srikanth Reddy, MLA from Kadapa, in this interview with rediff.com's Vicky Nanjappa, says that it is a wrong image that is being portrayed in the media that the state Congress is against Jagan. It is just two or three people from the Congress who have opposed him and they are the ones who have been poisoning the minds of the party high command against Jagan.

There are by-polls coming up in Telangana and it is in the backdrop of a huge sentiment. What are the chances of the Congress?

When you say a sentiment, I often wonder what you people mean. Only the politicians were interested in a separate state, the common man never was. There was never any sentiment for a separate Telangana and it was all created to benefit one political party (Telangana Rashtra Samithi).

These are the same persons who have misguided the Union government and it is on this basis that Home Minister P Chidambaram made the statement promising political consultations on the formation of a separate Telangana state. Once this statement was made, it evoked the sentiment of the people and they started thinking, 'Why not pursue the demand, it has come this far, so why can't we take it all the way through?'

What are the chances of the Congress in the by-polls?

The mindset of the people may have changed after the statement of the home minister. However, if the people who go to vote think of the development that has taken place in their area, then the Congress will walk through.

However, what our party has to be wary of is the sympathy factor. In case the voter sympathises with those who have resigned for the sake of a separate state, then it will be difficult for any other party to win the elections.

Now, coming to the core issue of Jagan. The AP Congress has reacted sharply to this rally. Why is that?

One must draw an inference over here. First of all, there is no opposition, and secondly, this is not a political rally in the first place for anyone to be affected. It is an individual rally and he is just reaching out to the people (to console the families of the people who lost their lives in grief following the accidental death of YSR). There is no harm whatsoever in that.

Looking at the manner in which he has been drawing crowds, it appears that a lot of Congress leaders have helped him arrange for the crowds.

That is not true. Just remember that his father, YSR was like a God in all these places. People have come forward voluntarily and arranged for vehicles to ferry the crowds. There is no political activity in this whatsoever. He has been drawing the crowds on his own strength, and this indicates his popularity.

The Congress is mum about his rally. Is there any pressure on all you people to stay quiet?

No there is no such pressure. What is there for us to talk about it? As I said, this is not a political rally. So why should political personalities react to this?

If this rally was not a political one, then why did the high command have reservations about it in the first place? There is surely something wrong.

So the high command took its decision on the opinion of three people while ignoring the rest of the Congress leaders in AP?

That is not what I am saying. I would not want to comment on that, but let me tell you that a majority of the Congress is with Jagan.

Who are the three persons who have been misguiding the high command?

I would not want to take names. As a politician it is not correct to opently take names, as everyone knows who they are.

Is K Rosaiah (Andhra Pradesh CM) one of them?

No he is not. Rosaiah has nothing against Jagan.

Jagan's camp says that 80 per cent of the AP Congress is with him. Is that correct?

Are you ready to accept Jagan as the next chief minister?

It is too early to talk about CM right now. But the entire Congress will back him and encourage him.