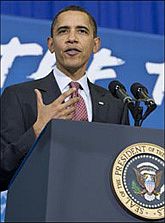 United States President Barack Obama did not pay full attention to the war on terror in his first year in office as he was 'distracted' by domestic issues like health care and climate change, officials associated with the 9/11 commission have said, describing the botched Christmas Day bombing as 'a wake-up call.'

"In a way, this Christmas Day bomber (who tried to blow up a US airliner leading to stepped up security across the US) did us a favour. I think we were not paying close attention to this area, and it's understandable," Thomas Kean, ex-Chairman of the 9/11 Commission, said in his appearance before the Senate Homeland Security and Governmental Affairs Committee.

"We were talking about health care, cap-and-trade, certainly the economy... We got distracted a bit, I think. Everybody from the president on down got distracted, and we weren't paying full attention to this area," he said.

So these things were allowed to develop and cracks allowed to form and 'things got a little off track,' Kean said at the Congressional hearing on 'Intelligence Reform: The lessons and implications of the Christmas Day attack.'

Kean termed the botched attempt by Nigerian bomber Umar Farouq Abdulmutallab to blow up a US plane on December 25 as a wake-up call for the Obama administration.

"I assume that the actions are going to follow the statements and that he (Obama) is going to pay now strict attention to this problem," he said.

"It's my impression that the intelligence community is new, relatively new to the president. I think he began to receive intelligence somewhere along the campaign," Hamilton said.

"I do not think he has a firm grasp yet of the intelligence community and, therefore, I'm pretty strong in my thought that he has to step in pretty hard here, or some of these tensions which have surfaced will exacerbate," he said.

Kean, the former New Jersey Governor, and Hamilton -- whose 2004 recommendations paved the way for the federal government to adjust its intelligence operations to meet the evolving threat of 21st Century terrorism -- emphasised the importance of supporting strong civil liberties protections in an age when the government must intrude on some areas of individual privacy for the sake of security.

They renewed their plea for Congress to consolidate its oversight of the intelligence community and the Department of Homeland Security, a 9-11 commission recommendation that met with fierce resistance from the full Senate in 2004.

Kean and Hamilton told the Homeland Security and Governmental Affairs Committee that strong support from the President is needed to ensure that the Director of National Intelligence can force integration of intelligence community as intended by 2004 legislation authored by Committee Chairman Joe Lieberman and Ranking Member Susan Collins.

They said the failure of the US government to detect and thwart terrorist attacks at Fort Hood military base in Texas, where a soldier went on a shooting spree killing 12 of his colleagues, and on December 25 underscored continued tensions among components of the intelligence community.

"One of the challenges revealed in our hearing last week was the overwhelming amount of information that is collected for analysis," said Lieberman.

"We must better organise our intelligence gathering and analysis efforts so crucial information can be mined more quickly from this vast mountain of data we build."

The president also needs to clarify the primacy of the Director of National Intelligence, who has an immensely difficult job integrating 16 intelligence agencies, spread throughout the federal government, and include him in all major decisions regarding terrorism directed at the US and its citizens, Lieberman said.

Senator Collins argued that to fight terrorism, the President, Director of National Intelligence, Secretary of State and other leaders must use the laws passed by Congress to their fullest extent.

"Unfortunately, the terrorist attack at Fort Hood and the failed Christmas Day plot are stark reminders of what can happen when those authorities are not used effectively," she said.

"The President must empower his senior officials to use every authority available to them to defeat the terrorist threat. These reforms do not require action by the Congress. They do not require a 60-day review to consider. They should be implemented now by the president. Nothing less than our security hangs in the balance," Collins said.