'There is a lot of sex starvation in Kerala' 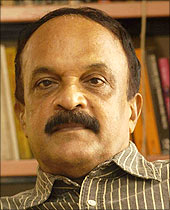 Paul Zacharia, noted Malayalam writer, is also a social activist these days. Recently, he created a furore in Kerala with his criticism of the way the moral police in the state broke open the house where Congress party leader Rajmohan Unnithan was 'caught with a woman'.

In a hard-hitting article Zacharia posited that Malayalis had two diseases: politics and sexual perversion. He also criticised the moral policing by the Communist party. Soon he was attacked by the Democratic Youth Federation of India activists at Payyanur where he had gone to attend a literary function.

In this exclusive telephone interview with rediff.com's Shobha Warrier, Zacharia calls a spade a spade.

Your article in the Malayalam weekly Kala Kaumudi on sex and the Malayali created a lot of furore in Kerala. Have you been thinking about this connection for a long time, or was it the Unnithan incident that made you write such a hard-hitting article?

The issue has been in front of many of us for quite some time, and we have been thinking about this also for a long time. It is a constant newspaper item in Kerala that 'local people caught hold of a man and a woman and handed them over to the police'. This is the way the media likes to present such incidents.

Is it a kind of moral policing by Kerala society?

Absolutely. It is moral policing by the society and the media. There is a lot of sex starvation in Kerala.

The media in Kerala has been promoting this kind of a moral order by giving publicity to the acts of society when they barge into a house where two adults are. They present what the local people have done as a good thing. The police also encourage this.

You wrote in the article that this kind of a sexual perversion is there in the mainstream media, intellectuals, police and also in political parties. What do you think is the root of such sexual starvation?

The root can be traced to many sources. The Hindu society in Kerala never had such a conservative attitude to sex and man-woman relationship.

It is possible that the Christian missionary education is the reason behind this. They, by and large, look at sex as a sin. Almost hundred percent of modern education in Kerala is in Christian hands. The Catholic and Protestant morality was transplanted here at a certain level. But the funny thing is that those Christian societies in England, Germany etc from where the Christian missionaries came to Kerala, changed dramatically and nobody has any control over them. Sex is not a sinful activity there. Even when their politicians do it, it is not a sinful activity.

Why is it that Kerala society still follows what they did several years ago?

They (the Europeans) fought two World Wars, and moved to modernity and the societies escaped from the clutches of the church. But what they planted here got rooted in a feudal society in a very big way.

Then the second revolution in the form of Sreenarayana Guru came to Kerala but he also took a very liberal view of man-woman relationships. Then came Communism -- the progressive forces.  At the nascent period of Communism when it was taking root in Kerala, the entire Left movement was extremely liberal, broad-minded and was creative and imaginative. The Left movement was led by those creative intellectuals who had no hang-ups about sexuality or man-woman relationships.

You mean they were for personal freedom?

Exactly. It was about ideological freedom, personal freedom and very much about changing the society. All of them thought they could change the society. If you read about their lives while they were hiding, like Thoppil Bhasi's Thadavile Ormakal, you will know how they fell in love not looking at caste and creed, and how some of them had what we call illicit children while in hiding. That was the forties when Communism was an underground movement in Kerala. In the late fifties, it became a political force.

From liberal personal freedom to control over personal lives, how did such a change happen?

Once the party tasted power, the Stalin model was imported here. There was the Stalinist behavioural code as part of the party's teachings, and the party lost the old liberalism, and it narrowed down to total control of an individual. If a comrade wants to get married, he has to get the imprimatur of the party. The party had such control over all its members. It is there today also.

The driving force of the party or the Left movement was humanism. With power, humanism was thrown out of the door. The leaders who were broad-minded and those who believed in humanistic values started leaving the party.

Is it the dearth of good leaders and the rise of new leaders with no vision that resulted in such a situation in the party?

Yes, the new breed of leaders is not well read, they have no vision and they have no worldview. Among them, the most guilty is E M Sankaran Namboodiripad. He is the man who imposed the Stalinist moral on the party; the dry theoretical materialism on the party. With that, man-woman relationship also changed. He changed the party into a strong orthodox and controversial system.

What happened to the intellectuals and literary personalities who were part of the Left movement?

They broke away from the party. From O V Vijayan to P Bhaskaran, everybody came out of the party. That was how the split took place, and the Communist Party of India and CPI-Marxist were born. Almost all the creative people and thinkers went to the CPI. At that time, the CPI was different.

The Hindu feudal society in Kerala along with the sinful concept of Christianity, and the conservatism of the Left, created a fertile ground for perversions. And what made it grow is the media in Kerala.

Do you consider the media also as intellectual dwarfs?

The media is mediocrity! The best example for mediocrity is the media in Kerala now. It is the media that promoted this new conservatism that is based on sexual jealousy, as if it is the right thing to do. This is what is happening in the last 25-30 years. Most of the newspapers grew in circulation by blowing up the sex stories of many men and women, out of proportion. It was all because of the segregation and sex starvation in society.

It was written in a Malayalam magazine that when Arundhati Roy came to Kerala, she refused to attend a press conference. It seems she said, 'The journalists don't look at my face but look at my breasts...'

It is very true. She expressed the truth very bluntly. The Kerala society has become very unhealthy in this matter. I don't know when the people of this state will get sexual maturity.

You live in Chennai. Do you think if a man and woman are alone in a house there, will the Tamils break open the house and pull them out? I don't think so. But it happens in Kerala.

What about the political colour that has been given to your opinion? You spoke about something unhealthy that is happening in society but you were attacked by the DYFI in Payyanur?

Payyannur is a Communist stronghold and only the party dictum runs there in the villages. Nobody dares criticise the party there. After the meeting was over, one man came up and threatened me. He said, you should not have justified Unnithan here. I said, they were two adults and nobody has any right to criticise Unnithan and the woman. I also told him, I was not justifying one person but any man or woman in that situation.

Later, when I was about to go to the railway station, a group of men came and started abusing and pushing me around for criticising the DYFI. The performance went on for 10 minutes (laughs). Two days later, (the CPI-M state secretary) Pinarayi Vijayan says the people of that area got excited because I abused the giants of communism and not the DYFI.

Is this kind of conservatism confined only to the Communists, or all political parties?

You said Malayalis suffer from two diseases: politics and sexual perversion. How did Malayalis react to this statement?

The thinking minority agreed with it. But the silent majority suffers from these two diseases, and they indulge in moral policing.

Do you see any hope?

Sadly, I don't see any hope. Politics has become so rotten here. Religions also have become rotten. Casteism is on the rise. Whatever rotten things that were thrown out of society by the old Communists and Narayana Guru have come back to rule. And the role played by the media in this is the most obscene and dangerous.