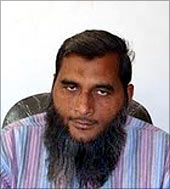 The Union home ministry recently extended the ban on the Students Islamic Movement of India by two years. This is the fifth time that the controversial organisation, allegedly involved in terror activities across India, has been banned by the Centre.

In August 2008, a special tribunal had lifted the ban on SIMI but it was subsequently reinstated by the Supreme Court.

In an interview with rediff.com's Vicky Nanjappa, Dr Shahid Badr Falahi, who was the president of SIMI when it was first banned in 2001, rues that the outfit is blamed for every terror activity in India and even the apex court has refused to give it a hearing.

Your organisation has been banned again. What are your thoughts on this?

This is the fifth time that SIMI is being banned. We were banned for the first time by the Bharatiya Janata Party led-National Democratic Alliance government in 2001. The ban was extended in 2003, 2006, 2008 and now in 2010.

This is an unnecessary ban. The special tribunal, headed by Justice Geeta Mittal, had lifted the ban on the ground that there was no proof (against SIMI). The government immediately went to the Supreme Court and obtained an indefinite stay order against the tribunal's judgment.

Why don't you approach the Supreme Court to seek a suspension of the stay order?

The stay order is indefinite. We have not been able to get a date at the apex court. When the ban was imposed for the first time, we had approached the Supreme Court, and that case is still pending.

After SIMI was banned for the second time, we had gone to the Supreme Court; even that case is pending. In all, there are four cases pending in the SC. Till now, no legal proceedings have commenced in any of these cases.

The government must have a very strong case against you, as the Supreme Court has not even given you a hearing till now.

In 1992, the Jamaat-e-Islami, the Rashtriya Swayamsevak Sangh, the Vishwa Hindu Parishad and the Bajrang Dal were banned. The tribunal hearing the matter lifted the ban on the RSS. This is the same RSS which is accused of killing the Father of the Nation (Nathuram Godse, who killed Mahatma Gandhi, was an RSS member) and also demolishing the Babri Masjid. In this case, the Supreme Court did not interfere with the verdict of the tribunal. The Congress government at that time did not appeal against the tribunal's decision.

But in our case, the government was very quick to oppose the order of the tribunal. Even the cases against the Jamaat-e-Islami and the VHP were decided within a month and the ban on them was lifted, despite the tribunal confirming the ban.

We have been waiting for justice for the past eight years. Who do we appoint as our advocate and to whom do we go begging for justice?

Which government do you blame for this, the Congress or the BJP?

Congress toh BJP ki naani hai (The Congress is the grandmother of the BJP). The BJP made the wrong allegation first and the Congress has now given it wings. Not only us, but the entire nation is facing something called Congress terrorism. We are oppressed by it.

Today, some die as Maoists and some as cadres of the Indian Mujahideen. Earlier, the Congress blackmailed us in the name of communal riots and today, it is in the name of terrorism. In fact, the Congress played the role of a guardian during the Babri Masjid demolition. Be it (the terror acts in) Mecca Masjid, Ajmer, Akshardham or Malegaon, the Muslims are blamed.

What about the likes of (BJP senior leader) L K Advani and (Shiv Sena chief) Bal Thackeray, who have played a role in the demolition of the Babri Masjid? Why should they walk around like VIPs with security cover?

The government is confident that there are elements in SIMI who have terrorist affiliations.

If there are black sheep, they ought to be weeded out. If someone has done something wrong, I am not opposed to them being punished. (Late Anti-Terrorism Squad chief) Hemant Karkare changed the very face of terrorism in the country with his path breaking investigation (in the Malegaon blast case). There were members of (Hindu right wing organisation) Abhinav Bharat involved in cases of terrorism. They were punished, but was the organisation banned?

Are you trying to say that SIMI has no role in perpetrating terrorism?

Yes, that is what I am trying to say. SIMI has been blamed for almost every incident that has taken place. These are phases in our nation. First it was the Punjab problem (the Khalistan movement) and at that time, for every incident the Babbar Khalsa was blamed. After this it was the turn of the Al Qaeda. There have been different names at different times. Who is doing what still remains a mystery.

So you are saying that the Babbar Khalsa and the Al Qaeda are not involved in terrorism?

That is not what I am saying. Let there be a proper investigation. It is not right to blindly place the blame for each and every incident. We all saw what happened in Malegaon and how Hemant Karkare changed the face of the case.

What does SIMI plan to do now?

Since the day the ban was imposed, we have done nothing but spend all our time in legal battles.

The police allege that your activities continue unabated.

A very crucial person of your organisation, Safdar Nagori, who allegedly turned SIMI into a radical outfit, is in jail. Do you know him? What do you think about him?

I was the one who appointed Safdar Nagori. There was nothing to show that he was involved in any kind of illegal activity when he was with me. Once the ban was imposed, I was arrested. After that I did not hear anything about Nagori.

We are depending a lot on police statements against Nagori today. Let him be tried. If he is found guilty, then I will support his punishment as per the course of the law.

According to the police, Abdul Subhan, a member of SIMI, set up the technical cell of the (terror outfit) Indian Mujahideen. What do you think of the allegations against him?

Abdul Subhan too was appointed by me. He was the editor of our magazine English Movement. At the time of the ban, he was with me. Today, only Allah knows where he is.

Is SIMI another name for the Indian Mujahideen?