News
Business
Movies
Sports
Cricket
Get Ahead
Money Tips
Shopping
Sign in  |  Create a Rediffmail account
Rediff.com  » News » 'The illiterate farmer is becoming a thing of the past'

'The illiterate farmer is becoming a thing of the past' 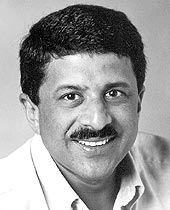 What are the poor most concerned about?

After meeting families in 175 Indian villages in the last decade, Anirudh Krishna, left, says the poor's greatest worry is their children's future.

With a manner of a school teacher, Professor Krishna, who teaches at the Sanford School of Public Policy at Duke University in the US, has lead a team meeting poor families to find out why poverty persists.

The research also includes the United States, India, Kenya, Uganda and Peru and this analysis on poverty has resulted in a book One Illness Away - Why people become poor and how they escape poverty.

In an e-mail interview to Rediff.com's Archana Masih, Professor Krishna reveals some interesting facets from India's villages like how many more rural children were going to school compared to a generation earlier but yet their highest career achievements had mostly been low-paid occupations like a schoolteacher or army jawan. Hardly anyone aspired to be an engineer, doctor, journalist, businessman, sports star, or college professor.

Insights from a fascinating interview!

In your interaction with people in villages, what are the most visible improvements you have observed?

Many more children are going to schools today. There is a huge upsurge in education, especially at the primary level and to some extent also at the middle school level, although enrollments drop off sharply at the high school level.

The other visible improvement relates to the spread of mobile telephones, although in the more remote villages only a tiny percentage of people still have phones.

In an earlier interview, you have said you tell villagers you are a school master and that helps them open up to you. What have been their primary concerns that they convey to you? What are their greatest needs?

I say that I am a teacher, because I wish to make it clear that I am not from the government or some NGO, so I have no programme benefits to give out. Nothing people say to me will either benefit them or harm them.

Once they know these facts, people are more likely to speak honestly about poverty and about their living conditions in general.

What I find people most concerned about is their children's future.

Agriculture is no longer a promising prospect: Productivity has remained stagnant while average farm sizes have fallen.

So people look to avenues outside agriculture, and they invest a great deal far more than ever before on their children's education. Their hope is that education will serve as a pathway to a better life.

Unfortunately, very few people have gained economically to any considerable extent. The quality of education remains poor in villages.

Further and as important there is a tremendous lack of information about alternative careers.

Data that I collected from nearly 100 diverse villages, some close to major cities, like Bangalore, and others further away, show that their highest career achievements in the past ten years have mostly been low-paid occupations, such as schoolteacher or army jawan. Hardly anyone has ascended any higher.

The worst part is that young people presently at school aspire only to such relatively low-paid achievements.

Among hundreds of youngsters between 14 and 22 years of age whom we interviewed in villages hardly anyone aspired to be an engineer, doctor, journalist, businessman, sports star, or college professor.

Knowledge of superior career alternatives is sparse. Knowledge about how to get from here to there is virtually non-existent in villages.

What has really changed for India's poor?

What difference have schemes like NREGA, Panchayati Raj, National Rural Health Mission etc made to their life?

First, education, at least to the primary level, has made a quantum jump.

The illiterate Indian peasant is soon becoming a thing of the past.

A large majority of young people, those between 10 and 20 years, are functionally literate (by which I mean five or more years of school education) several times as many literates as among their parents' generation.

Second, NREGA has, in the parts of India where I have seen its operations, resulted in ramping up the socially-acceptable rural wage rate. It has made the minimum wage a real and lived expectation, not merely a number noted in the statute books.

What has not changed, or rather, what has in many cases changed for the worse, is the nature of economic opportunity.

Despite investing in education, people are not seeing any tangible returns.

There seems to be some critical minimum threshold of education, perhaps college or a professional degree, without which economic gains are hard to achieve.

Most people have not been able to advance to that level. As a result, their investments in education have not borne fruit.

Rising frustration is one consequence; a backlash toward education might be another. Both are potentially dangerous situations that need attention urgently.

There are cases of children dying of malnutrition, specially in Madhya Pradesh.

What do you think are the biggest reasons for the government not being able to extend its food and health policies to deprived mothers and children?

There is an acute lack of information and access in many parts of rural India. Many people are not aware of the programme benefits that are available, and even when they are aware of their existence, they find it exceedingly difficult to gain access to these benefits.

Local-level institutions that can help people gain information and access is critically important.

What about the urban poor, people who move out of villages and come to cities? Are they sometimes worse off than the rural poor in terms of getting access to the Public Distribution System etc?

I have recently begun to study urban poverty in greater depth, examining the conditions of these migrants at both ends -- in the rural communities from where they start and in the urban communities where they end.

I am partnering with key NGOs for this purpose, including Janalakshmi in Bangalore and Aajeevika Bureau in rural southern Rajasthan. These results are still very preliminary, so I will be able to say more in another few months.

My impression, however, is that while many motives drive the migration decision, prominent among them is the motive of improving the opportunities available for one's kids.

The pattern of economic growth that we have adopted (and which much of the rest of the world has also adopted) concentrates on new opportunities in cities.

The bigger the city the greater the opportunity set. Thus, people will continue to migrate in ever-larger numbers.

What we are witnessing is no less than the largest migration ever in human history in terms of the numbers involved. Yet, relatively little is known about the obstacles, risks and reversals faced by these migrants.

Hopefully, the results that we derive from our ongoing studies can feed into the development of a more humane societal and policy response.

One big problem lies merely in obtaining identity documents. Because they lack any steady address, new migrants particularly are unable to get documents, so they cannot avail themselves of public programs, such as PDS. Also, because they do not find mention in electoral rolls, political parties and leaders see little benefit in taking up these migrants' cause.

A recent study by Oxford Study and Human Development points out that the eight poorest states in India contain more poor people than 26 of the poorest African countries together.

It also estimates India's poverty rate at about 55 percent, twice the official figure calculated by the Planning Commission. What experiences have you encountered on the ground keeping these findings in mind?

Rural poverty in India has grown in the period between the early 1990s and the mid-2000s.

Estimates that I derived from a panel data set of more than 15,000 households compiled by NCAER (The National Council for Applied Economic Research) show that income poverty in rural India has increased by 4 per cent.

The data shows that 18 per cent of rural households moved out of poverty over this period, but at the same time another 22 per cent of households fell into poverty.

Every rural occupational group that derived its principal source of income from agriculture experienced more descents into than escapes from poverty.

Relying upon farm income alone is no longer a reliable strategy for escaping poverty in rural India.

Only those rural groups who derive the major part of their income from non-farm work have experienced a reduction in poverty.

Andhra Pradesh and West Bengal experienced very similar rates of economic growth, but patterns of poverty reduction were radically different in these states.

In some states that had relatively low rates of economic growth like Punjab and Rajasthan, the rate of rural poverty reduction was higher than the average.

In some other states with faster rates of economic growth, Gujarat and Tamil Nadu, rural poverty actually grew over the same period.

How poverty is calculated in India