'The Gujarat police are in denial about post-Godhra riots' 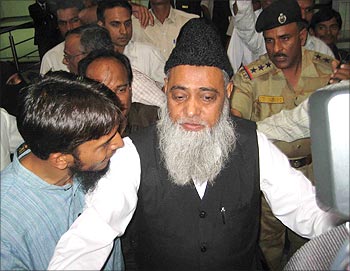 After spending five years in the high-security Sabarmati jail in Gujarat, Maulana Mohammed Naseeruddin was granted bail by the Supreme Court on September 4.

He was arrested by the Gujarat police in October 21, 2004 and booked under the Prevention Of Terrorism Act for allegedly having links with Pakistan-based terror groups. Later, he was accused of plotting the murder of former Gujarat home minister Haren Pandya.

Naseeruddin's three sons, Riazuddin Nasir, Jaber and Yasir, were subsequently arrested on terror-related charges. While Nasir is in the Karnataka police's custody for allegedly planning serial attacks in Karnataka and Goa, Jaber and Yasir are imprisoned in Indore for alleged terror links.

This was not Naseeruddin's first brush with the law. President of an organisation called the Tehreek-Tehfooz-Sharia-e-Islam, he was named as an accused in a terror plot to trigger blasts across Hyderabad during the immersion of Ganesh idols in 1998.

Naseeruddin, 59, who returned to Hyderabad on Friday, talked to rediff.com's Vicky Nanjappa about his detention and the charges against him.

How does it feel to return home after five years?

It feels good. I am a bit tired; well-wishers and relatives keep visiting me throughout the day. I have to meet them since they stood by me when all these false cases were lodged against me.

Do you believe injustice has been done to you?

I was falsely implicated by the Gujarat police. They said they were charging me for delivering a provocative speech which led to the killing of several youth. All I can say is that I had raised my voice against injustice. Mera saath naainsafi hui hai (I have been treated unjustly).

Why did the police keep you in jail for such a long time?

Once again, I maintain that the case against me is false. I was not involved in any conspiracy at all. I was very vocal about the injustice being meted out to Muslims.

They wanted me to stop raising my voice against oppression and hence they decided the best way to do that was to take me into custody.

The Gujarat police were trying to instill a sense of fear among the people who raised their voices against the atrocities being meted out to Muslims.

What was the specific charge against you?

They said I had instigated a lot of youth in the aftermath of the Gujarat riots. They claimed many communal riots took place because of my speeches.

Could you share some of the interactions you had with the Gujarat police while you were in their custody?

The Gujarat police were in complete denial of any violence in Gujarat post the Godhra riots. They kept telling me there was no problem between the Hindus and Muslims in Gujarat and each community was living in harmony. They kept saying I was unnecessarily provoking the youth across the country on the basis of the Gujarat riots.

They tried so hard to convince me that everything was always peaceful. On one occasion, while I was being taken to court, the police stopped the jeep near a bazaar. The inspector told me to take a look at a nearby building. He said, 'See, this building belongs to a Hindu, but all the tenants are Muslims. Look at the environment here, will you still claim that injustice is being meted out to Muslims in Gujarat?'

I did not say anything to the police at that time. But you tell me, was I wrong in raising my voice? Do you really expect me to believe that everything was peaceful in Gujarat?

Were you tortured by the Gujarat police?

No, they did not torture me either physically or mentally. I won't accuse them of things that they have not done.

Let's talk about the Haren Pandya murder case. You were accused of planning his murder.

In prison, I met a lot of people who were accused in the same case. I didn't even know them till I met them in jail. Each one told me that he had been falsely implicated in the case.

Prior to my arrest, I had never visited Gujarat. How can I sit in Hyderabad and plan a murder in Gujarat? It is meaningless.

I was an easy target since I had raised my voice against the atrocities (in Gujarat) and hence I became a suspect.

If the only charges against you pertained to making provocative speeches, why were you booked under POTA?

I fail to understand this. There were 52 persons accused in the case. A 1,500-page chargesheet has been filed in this case and there are just two lines about me in that.

The strangest part is that they have booked only me under POTA.

I realised later that had I been booked under the normal provisions of the Indian Penal Code, I would have been able to get out of jail very soon, and the Gujarat police didn't want that.

They felt that by booking me under POTA, my stay in the jail would be extended, as it would be tough for me to get bail.

Let us talk about your sons who have been arrested on terror-related charges. Is it true that a couple of years ago, the police had threatened you that your sons would have to pay for your activities?

All I can say is that my sons are innocent and they have been dragged into this mess unnecessarily.

My two sons, who are in Indore jail, had never visited that place earlier. The chargesheet does not mention anything against them in spite of which they are being made to suffer.

Even my son Nasir, who is in a Karnataka jail, is innocent.

What do you plan to do for your sons?

I will fight for justice. I will go to the Supreme Court, begging for justice for my sons.

Do you think that the Hyderabad police are hand-in-glove with the Gujarat police?

Police forces across the country work together as a team. I don't know if they concocted a conspiracy against me.

Will you continue to raise your voice against injustice meted out to Muslims, as you have claimed?