'The Mumbai ATS is a brand new force today' 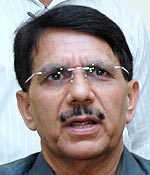 The Mumbai Anti-Terrorist Squad came in for a lot of flak post 26/11 since many believe this high profile police unit was caught napping by the attacks. The ATS also lost its chief Hemant Karkare in the terror assault.

There is a huge difference. A lot of thought went into upgrading the force following the Mumbai attacks. I would say that today we are a brand new force fully equipped to fight any aggression.

What makes the ATS different?

The Force One team has given the ATS a big boost. There are several commandos who are trained to fight terrorist groups and equipped with state-of-the-art arms and ammunition. We do not want this force to be lacking in anything. They are being constantly trained.

How will this force operate?

This is a force exclusively dedicated to fighting terrorism. The commandos are specifically trained to fight terrorists. However, I would not like to go into further details. There are certain technical details which are confidential in nature. Revealing such details would not be in the best interest of internal security.

Can you provide Mumbaikars an assurance that a 26/11 type attack will never occur thanks to all these measures that you have undertaken?

We are doing everything under the sun to prevent such attacks. But we must never underestimate the opponent. I am not aware of the strength of the opponent and we don't want to take any chances. All I want to say is that we are in a much better position to take on the enemy.

You have spoken a lot about the might of the Mumbai police. But you must be aware that there was a lack of coordination where intelligence was concerned. You had once said that the ATS would have a separate intelligence wing. What is the status of this?

A dedicated intelligence wing would mean that this team reports to us directly. There would not be any lack of coordination or misinformation.

However, I would like to add that there is a great deal of improvement as far as sharing intelligence is concerned. We are in constant touch with the Intelligence Bureau which keeps us updated and informed about developments.

What about the terror modules in Mumbai?

I would not be able to share information on this. But there is a steep decline in the number of terror modules and cells in Mumbai. We are constantly being updated about the situation and anyone who tries to create any disturbance on our soil will not be spared or dealt with lightly.

Complete coverage of the 26/11 terror attacks