News
Business
Movies
Sports
Cricket
Get Ahead
Money Tips
Shopping
Sign in  |  Create a Rediffmail account
Rediff.com  » News » 'World was with New Yorkers after 9/11, but not so after 26/11' 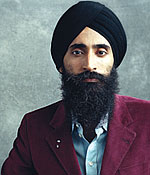 To India, With Love: From New York to Mumbai, issued recently to mark the anniversary of the Mumbai terrorist siege, is not just a coffee book, says Waris Ahluwalia, one of its three editors.

"It is a book that proclaims loud and clear that we love Mumbai," he continues, adding that its collection of stories and memorabilia from many celebrities, including Oscar-nominated filmmakers and an Oscar-winning actor, are used to rekindle their love and regard for India.

Waris speaks to rediff.com's Arthur J Pais about the book and his love for India and Mumbai in particular.

How did this book come about?

A few weeks after the horrifying Mumbai siege, Tina Bhojwani, Mortimer Singer and I -- all three of us New Yorkers who love India and who also love photography -- were discussing what had happened in Mumbai. We all felt we could do something to help.

We decided that the profits from the sales of the book should go to support families affected by the attacks. We wanted the book to make a difference in many ways.

How could you do that?

We want it to open the eyes of the world to the wonders of Mumbai and India. We want to show the incredibly beautiful India triumph over the attackers. And once again the pen or a camera dominates the sword.

What is the significance of the title of the book?

It declares to Mumbai and the whole country that we are all thinking of them and supporting them: hence, To India, with Love: New York to Mumbai.

You have also said that, in a small way, this book makes a gesture to your neighbours.

I am responsible for my neighbour -- even if the neighbour is some 10,000 miles away in Mumbai or Jaipur. This is one of the values my parents ingrained in me in my childhood.

Someone who reads a newspaper in India or watches television, be it a cab driver or a doctor or a businessman, will hear about this book, I hope. And that person would know there are people outside of India who keep them in their hearts and want to give back something to India.

Among other things, the terrorists also hit tourism...

We were very much aware of that when we thought of this book. The terrorists sought to bring darkness, but people in India had begun overcoming the attacks and the evil associated with it. We wanted to reinforce those efforts through this book.

What was the most important thought in your mind while planning the book?

I thought of 9/11 and how the whole world was with the New Yorkers. We were enveloped by love and sympathy. But in the case of Mumbai, it was a different scene.

In what way was it different?

After a few days of headlines, the siege was not news anymore. The people, who were affected in India and had to reconstruct their lives, were not in the news. Hardly anybody then talked about the people in Mumbai and how the city had been affected.

How much of Mumbai do you know?

I go there from time to time on business each year. Most of the six months I spend in India is in Rajasthan, but Mumbai is always in my heart. I was born in Amritsar and have lived in America for most part of my life (he is in his mid 30s). But Mumbai is my city as much as India is the country I love deeply.

You are a businessman and occasional actor. How did you make time for this project?

When you love something and when you know something has to be done, you find ways to make time for it.

How did you go around looking for contributors?

It started with my mother (chuckles) who has contributed one of the essays in the book. Then I approached the people I have come to know through Wes Anderson, who cast me in The Darjeeling Limited is among them. He is also in the book. And so are Adrien Brody (winner of the Oscar for Best Actor, The Pianist), Natalie Portman, and Owen Wilson.

We also approached people who are connected with India and are very much in love with the country. These include the (Oscar nominated) director James Ivory (who made films for Mumbai-born producer Ismail Merchant, including Heat and Dust).

These are very busy people. Was it difficult to persuade them?

(Laughs). Persuasion? I demanded they are in the book. I have been to India with a lot of these people. I said, 'Remember the time you were in India.' I have got photos of you... now, which one should I use?

The strategy worked very well, and soon my co-editors and I had a small library of photos, drawings, reminiscences. Among them is one of my favourites -- a shot of Cynthia Rowley (designer of fashion accessories) and Bill Powers (editor, novelist) in front of the Taj Mahal just minutes after Powers had proposed to her.

The book is also about people in India...

Is there a better way to tell the story of India but through its people, I wondered. And I feel the book proves that thought was right...

Who are some of the people you cherish most meeting in India?

Among many, there is Abdul in Jaipur. He is a driver but he is much more than that. He is a very resourceful person. He stunned me by speaking fluent Italian. He is like my local guide, and I feel very comfortable, safe and happy in his company...

What are some of the most important things does this book say about sojourners in India?

I know from my own personal experience, and from many people who have been to many cities in India or to just one or two cities that we come back saying we have been transformed by the experience.

But people also fall in love with many other cities.

True. I absolutely love Paris but the Indian experiences cannot be matched. I have been to Paris many times but whenever I go to India, I am on a very different journey. I am growing within myself. I am enveloped by the people and the sights and smells are unlike anything that I experience elsewhere.

I have known for a long time going to India means experiencing humanity as nowhere else.

India stays with you forever.

Coverage: 26/11 Anniversary - A year after the carnage

'I don't want Kasab to be given death sentence'