By Prasanna D Zore
November 17, 2009 09:21 IST
Himanshu Kumar knows that his phone is tapped and he is under surveillance not only in Chhattisgarh where he lives but even in Mumbai where he had come to address a discussion on 'Insurgency and counter-insurgency: Challenges of building a shared prosperity' last week.

Chhattisgarh's Bharatiya Janata Party government recently demolished the Vanvasi Chetna Ashram that Kumar had established to work with the tribals in Kanwalnar, Bastar. A staunch Gandhian, Kumar spoke to rediff.com's Prasanna D Zore about what attracted him to work with the tribals, on the atrocities committed on tribals by various paramilitary forces in Bastar and what could possibly solve the Maoist problem in India.

What inspired you to start your ashram in Bastar?

Mahatma Gandhi had said that young men should go to the villages and work there, otherwise this democracy would become a democracy of the goons.

I visited Bastar in 1988 and saw the pathetic condition of the Adivasis there. In 1992, I finally decided that I should go there and work for the upliftment of the tribals and so I set up my ashram there.

Who gave you the land to start the ashram?

As Bastar falls under Schedule V (a law that provides protection to the Adivasis living in Scheduled Areas) area, gram sabhas have the right to decide on land allotment. So the gram sabha in Bastar allotted us a piece of land on which we constructed our ashram. We used to give training to tribal boys and girls on personal hygiene, health, education and sanitation. 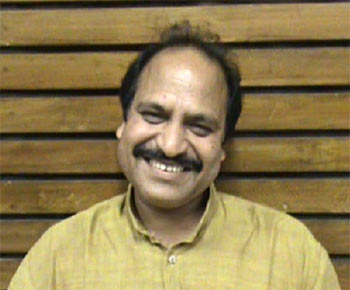 Why did the Chhattisgarh government bulldoze your ashram?

Because we had started raising issues of tribal alienation, the Salwa Judum's (the state government-supported movement against the Maoists) atrocities on tribals.

The government of Chhattisgarh was very uncomfortable about the issues we raised. While we were trying to rehabilitate the tribals, the state government was trying to evict them out of their homeland.

So we came in direct conflict with the government's plan to evict the tribals.

But why would the state government do that?

Just to get the tribal land and give it to corporates so that they could mine the land for mineral wealth.

Are you hinting at a nexus between the corporates and the state government?

They want land and they want no Naxal activity in the area so that they can mine the mineral wealth peacefully and in an uninterrupted manner. So they started it and they are in the field.

Are you saying that the strong corporate presence is driving operations like Operation Green Hunt, the Union government's military campaign against the Maoists?

Operation Green Hunt is nothing but an operation to get the tribals out of their villages. The paramilitary forces and Salwa Judum are attacking innocent old men, women and children.

Where are you getting these reports from? Or are these mere allegations?

We are meeting the people of these areas directly. We meet the victims of such atrocities. We are present in the field. We work in these areas and don't rely on others to get reports.

Has Green Hunt actually started in the way that it was reported in some sections of the media?

It is very much functional. It is going on.

First, the superintendent of police, Dantewada, said it when they attacked a village named Vishapal. They said it is Operation Green Hunt. And now our home minister (P Chidambaram) is saying that it is a media-invented term. The Chhattisgarh police first coined the term.

Do you think that the government is using the beheading of Jharkhand intelligence officer Francis Induwar as an excuse to launch Operation Green Hunt? Are such beheadings justified?

We condemn violent acts by all, irrespective of who the perpetrators are. But Naxals (the Maoists) are not our forces. They are not responsible to us. But these COBRAs (the government's Combat Battalion for Resolute Action) are responsible to the nation, to the state government.

I know of an incident where the COBRAs beheaded a 12-year old tribal boy only a month ago.

Do you have photographic evidence to prove your charge?

We have an eyewitness. His grandfather was with him and he has told us that his grandson's hands were tied to a tree and he was beheaded.

If small boys are beheaded like this and the government is not condemning it, it means it (the government) is for it (beheading of innocents).

Every day there are killings and lootings of the innocent.

Why don't reports of such atrocities appear in the media?

It appears that the media is very much influenced by the corporate houses and the Indian middle class that does not want to know about these tribals.

Tribals are not marketable news items. They are not even consumers (of modern amenities)that we should bother about them.

Are you saying that on one hand we have tribals and people like you and on the other hand the rest of India?

It's not like that. We very much want to be part of mainstream India. We want to draw the attention of the rest of the nation to the atrocities being committed against the tribals in this belt so that they can feel that they are a part of India.

So far the tribals are not feeling that way because India has not reached them.

Considering this style of violence can one say that the Salwa Judum and the Maoists are two different sides of the same coin?

It's not like that. It is the resistance that is there on the ground. It is very less Naxal violence now. It's people who are resisting government forces now.

Would tribals have beheaded Francis Induwar or was it an act of the Naxals?

It is a Naxal act.

In that sense do you think the Naxals and Salwa Judum are two different sides of the same coin?

You should understand why violent acts take place. In the tribal villages if these family members find policemen (who beheaded the 12-year-old boy) will they spare him? Will they not behead him?

While we should try to understand these reactions we should also strive to create an atmosphere where everybody shuns the use of violence.

What measures are you taking personally so that such an atmosphere evolves on the ground?

We are trying to rehabilitate villagers who are displaced by the acts of Salwa Judum and the state government. We are trying to get them justice by taking their cases to courts so that their anger calms down.

We are striving to get the civil administration back on its feet in these areas so that people can get rations, food, medical facilities, and they start leading a normal life.

At the same time are you also trying to prevail over the tribals, telling them that beheadings are wrong? Violence as a means to get justice is wrong?

Yes. Very much, everyday, every time we tell them not to indulge in violence in all our meetings.

In your presentation you said that Naxals have never attacked development workers. But they have attacked people working to build roads and bridges?

You are giving examples of roads... the roads are not for the tribals... they are mainly for the corporates, government and the police forces.

Tribals do not ask for the roads that are 80 feet wide. They ask for their rations first, schools and medical infrastructure for their families. But that is not given to them.

In Dantewada, 80 feet roads are being constructed, but schools lie in shambles. The priority of the government is roads because they want to strip off these areas of all the mineral wealth.

Is Operation Green Hunt all about taking India beyond the 10 per cent GDP growth rate?

Do you fear that the Chhattisgarh government will make another Binayak Sen out of you?

Have there been explicit threats to your life?

(Dismissively.) It's alright. I'm facing FIRs (First Information Reports), my house was demolished. Yes, every day there is so... but it's ok.

Is there a threat of your being eliminated physically?

Yes, I have heard about it. There are plans to kill activists like me and the Naxals will be blamed for it.

What are you planning next?

I will start a padyatra to stop this violence.

By this violence do you mean violence by both the paramilitary forces and the Naxals?

Can you say that explicitly?

Yes. (I will strive to stop the violence) By both parties. The Naxals and the State.

Do you have any message for our home minister?

Chidambaram's actions (the use of massive force to drive out the Naxals) are endangering the peace and integrity of our nation. He should put justice before everything else.

Is that the only way in which the Naxal problem can be solved in India?

Yes I believe so.

There is an allegation that you are a Naxal sympathiser. Would you like to comment on this allegation?

I'm always trying to suggest ways which can help reduce Naxal violence. I have never done anything that will help Naxalites. So it should be Naxalites who should be angry...

But the allegation is they are not angry with you... they let you function peacefully in Bastar...

No. It's not right. It's because people love us, people like us to be there.

Naxalites attacked us twice. They snatched away all our belongings once when we were on a peace march.

On another occasion they beat up our volunteers. So it's not that the Naxals like us.

The tribal people there have created a pressure on the Naxals that they should allow us to function in that area.

Finally, can you recite the poem that you said during your presentation? 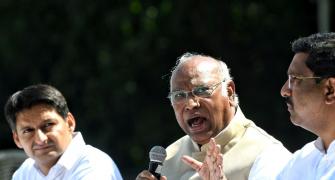