'LK Advani rules the BJP as a dictator' 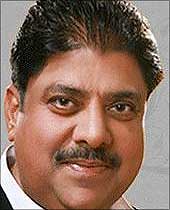 What led to the sudden decision of the BJP to break ties with your party, more so when the assembly elections are round the corner?

At no point did my party break the alliance. Nor did we put any condition for continuing the alliance. We have always believed that fighting the Congress is the cause on which we two should join hands at any cost. The fact is that the BJP asked us for 45 of the 90 assembly seats in the state. We know for sure that the BJP is in no position to win even a fraction of these seats. It does not have winning candidates in most of these constituencies. Take, for example, the Sonepat seat. We held a big rally on the eve of the Lok Sabha elections where even LK Advani came. But did the BJP win the seat? The BJP is simply trying to close its eyes to the ground realities.

What was the trigger for the break-up as you two had come together again only a few months ago? The parting was so sudden

The BJP is trying to paint the INLD as stubborn and unreasonable and blaming it for not yielding to its demands. The reality is just the opposite. The decision (of the BJP) was so sudden that we did not anticipate it. During his meeting with Sushma Swaraj, my father said that in case the BJP wished to contest 45 seats, she should give the names of the proposed candidates, who should be in a position to give a good fight at least. My father told Sushmaji that he was open to dialogue on this. But it seems the moment the meeting was over, the BJP started leaking to the media that it was the end of its relations with the INLD. We kept denying it till the next day. On hindsight, we realise that the decision to snap ties with us was taken at the BJP's chintan baithak in Shimla.

Interestingly, even Sushmaji acknowledged that the INLD had worked sincerely to make the alliance work. But the BJP did not reciprocate. The BJP's performance (in the Lok Sabha elections) in big cities and towns like Ambala, Karnal and Panipat was pathetic.

What has been your experience with the BJP as an alliance partner?

We forged alliance twice, once till 2004 and now just before the Lok Sabha elections. We feel the BJP uses its partners as a stepping stone to grab political space. They are in the habit of betraying their partners. That is how they treated Naveen Patnaik, Chandrababu Naidu, the Asom Gana Parishad and Farooq Abdullah.

What went wrong with the NDA's plan to win the Lok Sabha elections?

The basic reason was that people did not like LK Advani as a prime ministerial candidate. Advani's rejection was an all-India phenomenon. Because of this, alliance partners like us were also affected.

Also, confusing statements from the BJP jeopardised the NDA's chances. While the NDA was supporting Advani, someone from the BJP raised the name of Narendra Modi as a potential candidate for prime ministership. This caused confusion among people. Then, Varun Gandhi's statements kept minorities away from the NDA. Our parties had a strong base among the minorities and we lost heavily on this account.

After the election results, the NDA leaders have met twice. At these meetings, the BJP leaders did not want to talk about substantial issues. The fact is that the BJP people do not even listen to the advice of their own leaders. At the meetings, nobody was allowed to even broach the topic of as to why the NDA lost. .Even if someone spoke, they would simply ignore him or pretend that they had not heard him

The BJP is beset with problems of dissidence and factionalism right now. Since you have seen the party from close quarters, why do you think all this is happening?

The BJP lacks democracy. Advani rules the party as a dictator with the help of his coterie. Then, the doublespeak in the party on crucial issues was so visible with the recent expulsion of Jaswant Singh for praising Mohammad Ali JInnah in his book. While Jaswant Singh was punished for the same offence, LK Advani was not.

How is the situation in Haryana on the eve of the elections? Your party fared poorly in the last two elections and it sometimes seems the Congress may come back?

Haryana needs a change. You are being misled by the media blitzkrieg launched by the Hooda government at the cost of Rs 150 crore. Hooda is projecting himself through songs and films while the reality is that the law and order situation has become worse under his rule.

What is the INLD doing to change its image among voters after two humiliating defeats?

We have brought about a lot of internal changes in the party. Younger leaders and fresh faces will be fielded in these elections, which are due sometime in October. We have even promised incentives like a Scooty for schoolgoing children in the state and free ration for the poor.