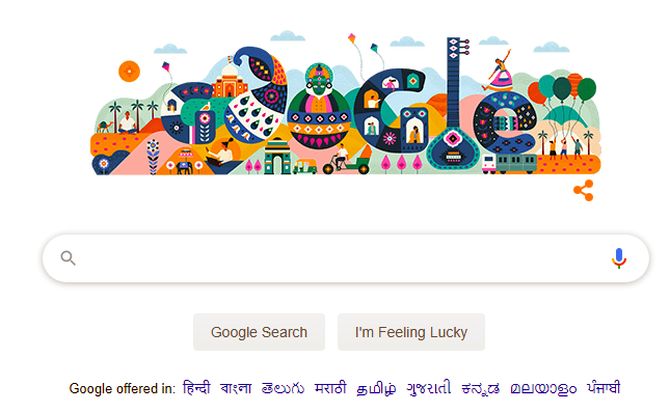 Internet giant Google on Sunday dedicated a special doodle to mark the 71st Republic Day, which captured the country's vibrant diversity, rich sartorial and cultural heritage as well as its beautiful bio-diversity.
The multi-hued doodle, with a dominant blue tone, depicts iconic monuments interspersed with images of famous music instruments and dance forms.
The Internet behemoth is known to mark landmark occasions and life and times of celebrated personalities with a special doodle on its homepage.
The six letters of the word Google have been portrayed colourfully and using images of India's national bird and an iconic south Indian dance form.
In the six letters of G-O-O-G-L-E, first 'O' has been represented with a peacock, second one with a face of Kathakali dancer, and the 'L' with a traditional musical instrument 'sitar'.
The rest of the three letters carry colourful images of life in India, making the logo of the search giant stand out, against a rich tapestry of the backdrop.
In the background, on top an image of Humayun's Tomb, a World Heritage Site, can be seen while India Gate with an auto-rickshaw and a pedal-rickshaw figure in the lower portion of the backdrop.
Kites fly in the back of the logo, while a woman dancer strikes a pose atop the letter 'E'.
Google India also tweeted the special doodle and wished people on the occasion.
The doodle, illustrated by Singapore-based guest artist Meroo Seth, highlights the rich cultural heritage that permeates and unites the diverse Asian subcontinent -- from its world-famous landmarks like the India Gate, it said.
-- PTI
« Back to LIVE

'Never before had I met such people. Or seen such things!'

This season of LFW has been a "colourful, bizarre, exciting adventure" for 20-year-old Rediff.com's Kshamaya Daniel, who viewed it for the first time.

In its judgment last year, the apex court had set aside the Bombay high court order which gave a clean chit to Fadnavis and held that he did not deserve to be tried for the alleged offence under the Representation of Peoples Act (RPA).

China withdraws from Davis Cup tie due to coronavirus

The Chinese team were due to travel to Romania for a March 6-7 playoff but will be unable to do so due to "increased restrictions" in response to the outbreak, the ITF said in a statement on Twitter.

The Indo-French pair beat Russia's Alla Kudryavtseva and Slovenia's Katarina Srebotnik 6-4, 4-6, 10-8 in a first round match.

Another Kambala racer has created a record in the 100 metres during the traditional buffalo race in Karnataka, covering the distance in 9.51 seconds, and improving on the timing of Srinivas Gowda, who stirred up a social media frenzy...