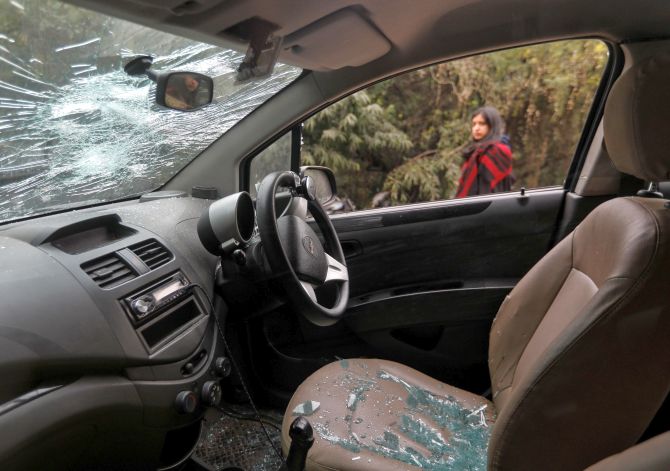 The JNU Students' Union on Saturday alleged that the police were informed about a mob's presence on the campus much before the violence on January 5 but they ignored the messages.
"They were informed at 3 pm and the messages were read at 3.07 pm but the messages were ignored," the Jawaharlal Nehru University Students' Union claimed at a press conference.
It also alleged that the RSS-affiliated ABVP was involved in attacking women students and JNUSU office-bearers last week.
The students' union said the ABVP members hit women students even on January 4 and when JNUSU general secretary Satish Chandra Yadav intervened, they attacked him as well.
"Attackers targeted specific rooms in Sabarmati Hostel and even threw students from balcony, but did not touch the room of an ABVP activist," it added.
-- PTI
« Back to LIVE

'Never before had I met such people. Or seen such things!'

This season of LFW has been a "colourful, bizarre, exciting adventure" for 20-year-old Rediff.com's Kshamaya Daniel, who viewed it for the first time.

Sachin Tendulkar being lifted on the shoulders of his team-mates after their World Cup triumph at home in 2011 was voted the Laureus best sporting moment in the last 20 years. With the backing of Indian cricket fans, Tendulkar got the...

RSS chief Mohan Bhagwat is expected to deliver a keynote address at a meeting aimed at 'clearing misconceptions about the organisation'.