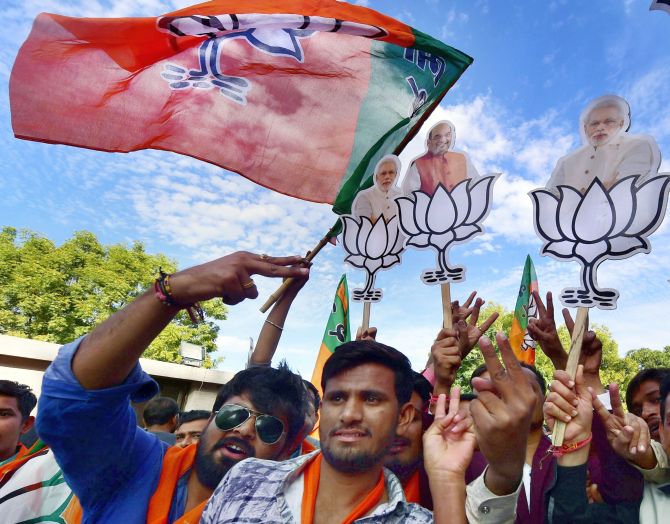 After the Bharatiya Janata Party's loss in the Delhi election, the party's top brass believes its leaders should restrain themselves from making controversial remarks as it is gearing up for the Bihar polls, with party chief J P Nadda cautioning Union minister Giriraj Singh against making such statements, sources said on Sunday.
Nadda summoned Singh, MP from Bihar, on Saturday and cautioned him against making such remarks after he stoked a controversy by describing Deoband, the seat of Islamic seminary, as the "Gangotri of terrorism".
Few days back, Union home minister Amit Shah, and the force behind the BJP's high-octane campaign in the Delhi assembly polls, attributed controversial remarks made by some party leaders in the run up to the campaign as one of the reasons for the BJP's defeat.
Speeches like 'Indo-Pak match' should not have been made by BJP leaders during the recent Delhi election campaign and that such remarks may have resulted in the party's defeat, Shah had said while speaking about the party's defeat in Delhi assembly polls.
The sources in the BJP said now the party has set its eye on the Bihar Assembly polls, where it is in alliance with the Janata Dal-United and wants to ensure their victory in the state.
Therefore, the BJP does not want its leaders to switch to provocative rhetoric which brings bad name for the party, the sources said, adding that at the same time such remarks may not go down well with the JD-U, which never hesitates in flaunting its secular credentials.
The assembly elections in Bihar are expected to be held around October this year and the JDU-BJP alliance government under Nitish Kumar is seeking re-election.  -- PTI
« Back to LIVE