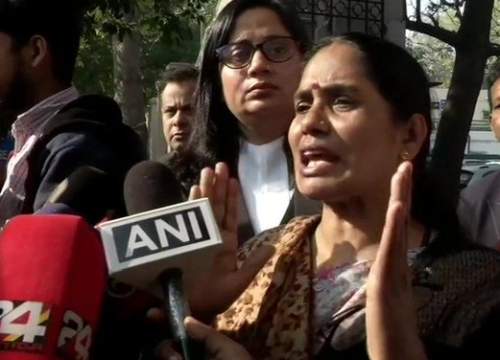 Nirbhaya's mother Asha Devi on Wednesday congratulated Aam Aadmi Party chief Arvind Kejriwal for his huge victory in the Delhi Assembly elections and urged him to ensure that loopholes in the law are removed for speedy justice.
"The public have once again elected AAP for five years. So remove loopholes in the law due to which the convicts continue to take the law for granted for a longer period of time. The Delhi jail should bring changes in the manual so that no convict escapes the death penalty," Asha Devi said.
Talking about the case, Nirbhaya's mother said: "The hearing in the Supreme Court on February 13 may be important. We hope the Supreme Court gives a guideline tomorrow because Nirbhaya's case is constantly going to the Supreme Court.
"The apex court has also given notice to the convicts in this case. We are hoping once again that the top court will give a guideline in this matter tomorrow."
On the plea filed by convict Vinay Sharma claiming that he is mentally unwell, Asha Devi said that the convict does not have any mental disorder.
"He is not mentally disturbed. He does not have any mental disorder. Now our last hope is on the guideline of the Supreme Court. Only the Supreme Court can give a decision in this regard. It has to be seen how much we have to struggle in this case. How long the guilty continue to take advantage of loopholes in laws," she said.
The Delhi High Court last week granted a week's time to the four death row convict to avail all legal remedies available to them and said that the convicts cannot be hanged separately since they were convicted for the same crime.
A Delhi court had issued a death warrant against the four convicts -- Vinay Sharma, Akshay Thakur, Pawan Gupta and Mukesh Singh -- on January 7. They were scheduled to be executed on January 22 at Tihar Jail. Later, the execution was suspended indefinitely by a Delhi court.
« Back to LIVE