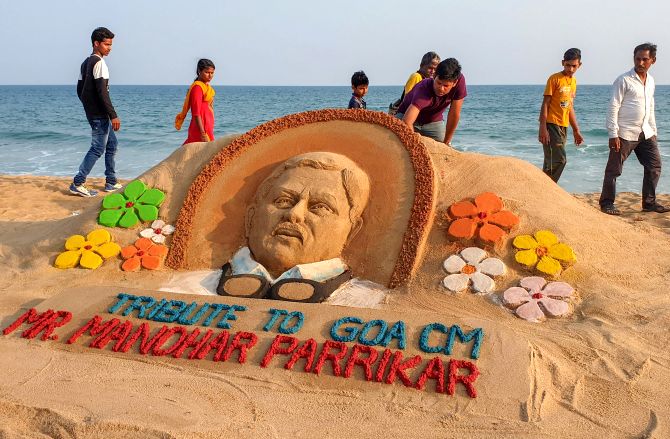 The foundation stone for a memorial dedicated to Goa chief minister late Manohar Parrikar will be laid in Panaji on December 13, Chief Minister Pramod Sawant said on Wednesday. Parrikar, who also served as the country's defence minister, died on March 17 this year at the age of 63.
"The foundation stone for the 'smriti sthal' in the name of Parrikar would be laid at the Miramar beach on December 13, the late BJP leader's birth anniversary," Sawant told PTI. After Parrikar's death, his final rites were also performed at the Miramar beach located in the state capital. Sawant chaired a high-level meeting on Tuesday to finalise the architect and design for the memorial. -- PTI
Image: Sand artist Manas Sahoo pays homage to Goa's Chief Minister Manohar Parrikar, who passed away battling a pancreatic ailment on March 17.
« Back to LIVE