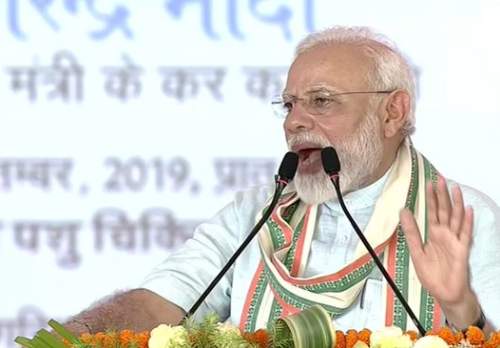 Prime Minister Narendra Modi on Wednesday launched the National Animal Disease Control Programme for eradicating Foot and Mouth Disease and Brucellosis in livestock.
With 100 per cent funding from the central government till 2024, the Rs 12,652 crore programme aims at vaccinating over 500 million livestock including cattle, buffalo, sheep, goats and pigs against the FMD.
The programme also aims at vaccinating 36 million female bovine calves annually in its fight against Brucellosis disease.
Modi also launched the National Artificial Insemination Programme before interacting with farmers.
During his visit, he joined women in segregating plastic from waste at the 'Swachhta Hi Seva' programme.
He also addressed a rally in Mathura.
"A century ago, Swami Vivekananda gave his historic speech at Chicago about world peace on 11th September. Unfortunately, the same day also witnessed  9/11 terrorist attack in US that shook the world.
"Iss desh ka durbhagya hai ki kuchh logo ke kaan par agar 'om' aur 'gaaye' shabd padhta hai to unke baal khade ho jate hain, unko lagta hai desh 16th shatabdi mein chala gaya, aisa gyaan, desh barbaad karne walo ne desh barbaad karne mein kuchh nahi chhoda hai. Unfortunately, there are some people in this country who are alarmed whenever they hear the word 'Om' or 'Cow'. They think the country has gone back to the 16th Century. Such is their knowledge. Such people have left no stone unturned in ruining this country.
"Today terrorism has become an ideology, which is not bound by national boundaries. This is a global problem. This has become a global threat whose deep roots are flourishing in our neighbourhood.
"Yogi Adityanath fought all his life against Encephalitis & brought it to the attention of Parliament & country. However, few vested interest groups blamed his govt for deaths of children due to it but Yogi-ji's spirit was not deterred and he continued his work."
« Back to LIVE