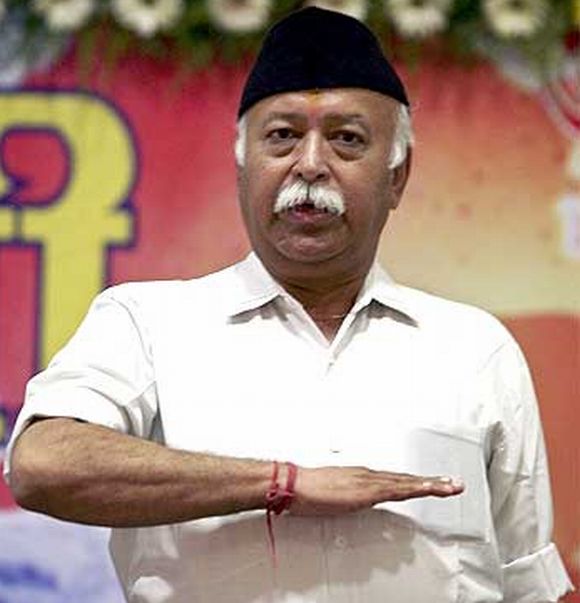 A six-year-old boy was killed and his grandfather injured after their two-wheeler was hit by a car in the cavalcade of RSS chief Mohan Bhagwat in Alwar district of Rajasthan on Wednesday, police said.
Bhagwat was returning from a programme in Tijara area when the incident happened and there were eight to ten cars in the cavalcade, police said.
"One of the cars in the cavalcade hit a motorcycle leaving six-year-old Sachin dead and his grandfather injured," said Ramswaroop Bairwa, sub-inspector of Mandawar police station.
The cavalcade went towards Behror after the incident, he said.
The car involved in the accident is yet to be seized, police said.
"An FIR has been lodged against the driver of the car on the basis of the vehicle's registration number," Bairwa said, adding that further investigations are underway.
Bhagwat, who gets Z plus security cover, was on a trip to Alwar.
-- PTI
« Back to LIVE

UN chief Antonio Guterres is closely following the situation in New Delhi and stresses that demonstrators should be allowed to protest peacefully and security forces should show restraint, his spokesperson said.

Smith back as top-ranked Test batsman; Kohli drops to 2nd

Australia's Steve Smith is back on top of the list of batsmen in the MRF Tyres ICC Test Player Rankings after India captain Virat Kohli could manage only 21 runs in his two innings in the first Test against New Zealand in Wellington,...

The NSA visited the affected northeastern parts of Delhi, including Jaffrabad and Seelampur, where he met police officers and gave them necessary directives, besides meeting leaders of different communities to assuage the tensed...

'I was like a scattered necklace; Indian Idol put the pieces together.'