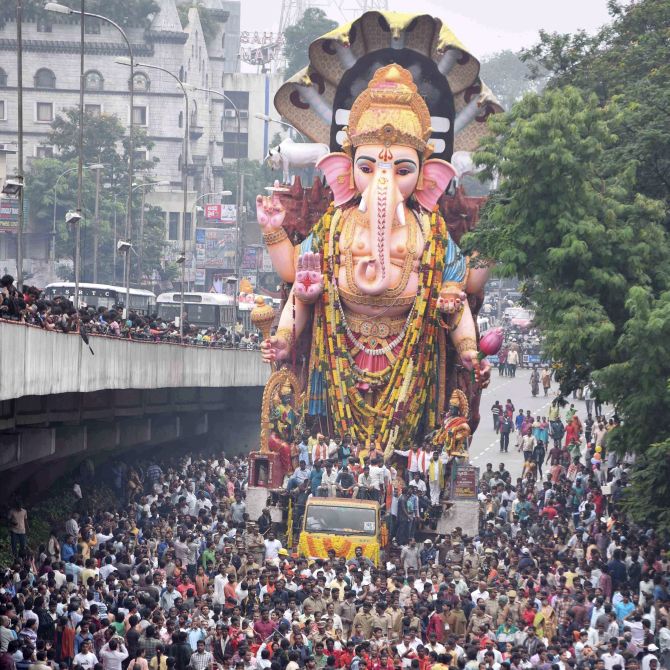 More than 50,000 police personnel will be deployed across the financial capital of the country on Thursday to ensure that Ganesh idol immersion processions pass off without any untoward incident, police said on Wednesday.
Key routes of processions will be monitored by drones, an official said. The 'Anant Chaturdashi' day, which falls on September 12 this year, marks conclusion of the ten-day Ganesh festival in Maharashtra.
In Mumbai, immersion of idols will take place at 129 places including Girgaum Chowpatty, Shivaji Park, and at Juhu, Aksa, Versova and Marve beaches of the Arabian Sea. Lakhs of Mumbaikars are expected to participate in key processions like that of 'Lalbaug cha Raja', the official said, adding that appropriate security measures are being put in place for crowd management.
Various wings of police including the State Reserve Police Force, Riot Control, Bomb Detection and Disposal Squad, Quick Response Teams will be deployed in the city, he said.
"Policemen in civic clothes will will be part of processions to prevent any untoward incident involving women and children. Processions will be continuously monitored by more than 5000 CCTV cameras," the official said.
An "anti-sabotage checking" will be conducted at every important immersion point, he said, adding that coastal police will patrol in their speed boats near immersion points.
He said at least 53 roads will be closed for traffic in Mumbai while vehicular movement will be allowed one-way on 56 roads. A total of 18 roads will be closed for heavy vehicles while parking of vehicles is not allowed at 99 places.
Meanwhile, Railway Over Bridges at Byculla, Arthur Road (Chinchpokli railway station), Currey Road and Juhu Tara have been declared dangerous for movement of heavy vehicles by the Central Railway, he said. "Accordingly, vehicles weighing more than 16 tonnes will not be allowed on these ROBs," the official added.
Members of Ganesh pandals will be held responsible in case of any untoward incident taking place on these ROBs during immersion processions, he said. -- PTI
« Back to LIVE