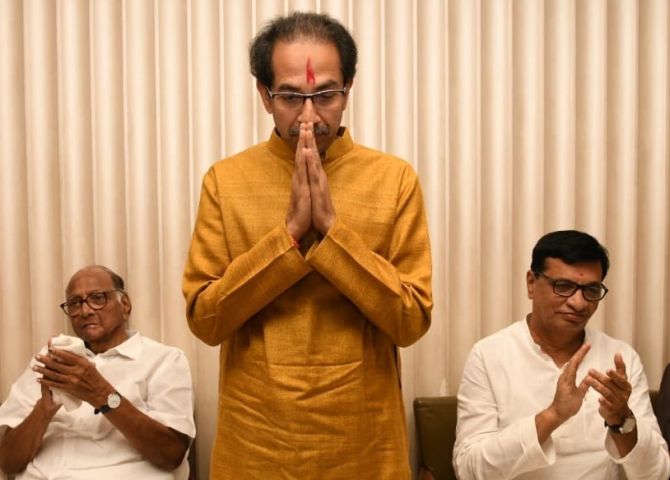 The Bombay High Court has refused to take up urgent hearing on a petition filed by a group of lawyers seeking a stay on the swearing-in of Uddhav Thackeray as chief minister of Maharashtra on Thursday evening.
The petitioners sought an urgent hearing of their plea, saying the Shiv Sena and BJP should have stood by their pre-poll alliance and formed government. However, two different benches of the high court refused to take up the petition for hearing.
A division bench of Chief Justice Pradeep Nandrajog and Justice Bharati Dangre asked what was "unconstitutional and void" about the swearing-in ceremony of Thackeray.
The petitioner's lawyer, Mathew Nedumpara, said there has been a breach of trust of the voters, who wanted the Sena and BJP to form government. To this, Chief Justice Nandrajog said, "Is the concept of divorce not new to the law of marriages."
Earlier, another division bench of Justices S C Dharmadhikari and R I Chagla also refused to take up the petition for urgent hearing, saying the bench does not have the time. -- PTI
« Back to LIVE

'Just to know him (Amitabh Bachchan) makes you a better artist,' revealed Amit Sadh on Instagram.

Uttam Ghosh offers his take on how Trump -- who wants to build a wall between his country and Mexico -- may react to the Gujarat wall on his visit to Ahmedabad on Monday.

Not 70 lakh, but 1 lakh to attend Trump roadshow

The number is much less than what the US president has been claiming. In a recent video, Trump said, "7 million (70 lakh)" people will be there on the roadshow route. Notably, the total population of Ahmedabad is estimated to be around...

Why stylists have the most EXCITING job

Behind the success of any outfit is a talented stylist who knows just how to amp up the design.

On February 9, 2017, the apex court had by a 2:1 majority verdict given relief to 78-year-old Sushil Ansal considering his "advanced age-related complications" by awarding him the jail term which he had already served. It had, however,...