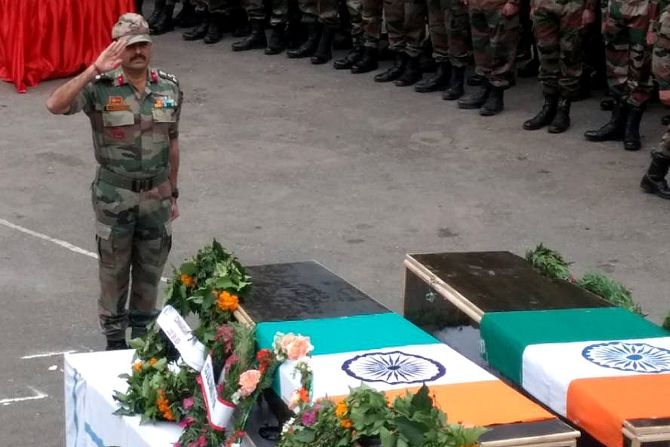 Incidents of unprovoked firing from the Pakistani side along the international border in Jammu have quadrupled this year as against 2017 and the figure was the highest in the past five years, according to official data.
The latest data accessed also shows that the Border Security Force suffered the maximum casualties this year -- 12 deaths and 40 injured.
The data shows that till September this year, a total of 498 incidents of cross-border firing have taken place along the IB in Jammu as compared to 111 last year.
The corresponding figures for the previous three years were 204 (in 2016), 350 (in 2015) and 127 (in 2014).
Twelve BSF personnel have been killed in these incidents this year, including the brutal killing of Head Constable Narender Singh last month. Singh was shot dead and his throat slit when his team went towards the fence to cut thick and long elephant grass near their border post in Ramgarh sector of Jammu.
A "record-high" number of 40 jawans have been injured in these incidents this year and these figures are the highest in the past five years, the data said.
A BSF jawan was also killed along the small portion of the Line of Control (LoC) that falls in Jammu this year, the data said. While the BSF is deployed under the operational command of the Army along the LoC, it secures the IB independently.
Last year, two personnel of the border guarding force were killed and seven injured due to sniping and mortar shelling incidents along the IB while three BSF personnel were killed and 10 injured in such incidents in 2016.
Similarly, a BSF jawan was killed and five were injured in 2015 while two men were killed and 14 were injured in 2014 at this frontier in Jammu and Kashmir.
A senior official of the force said in view of the recent killing of the BSF jawan along this frontier by Pakistani border action team, the force has asked the forward units along the IB to be on "extra alert and vigilant".
"The relations between the two countries and their security forces are strained for quite sometime now. It is, therefore, expected that the hostilities may rise and audacious attacks can be launched by the other side. The forward units hence have been asked to be very very cautious," the official, who did not wish to be identified, said.
Former BSF Director General K K Sharma, who retired last month, had told reporters during his last press conference here on September 28 that they were witnessing a "more aggressive stance" of the opponent along the IB in Jammu and Kashmir after Imran Khan took over as Pakistan's prime minister. -- PTI
« Back to LIVE