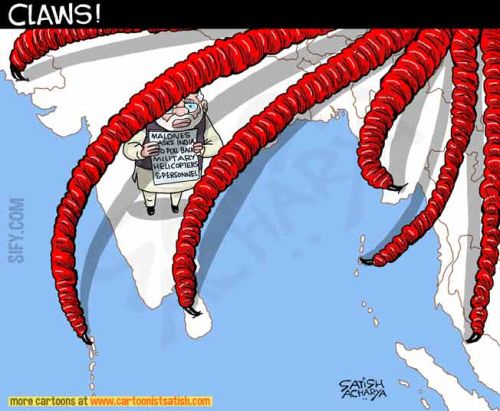 "Drop the cartoon and carry a photo!

"The cartoon he rejected was about how China is surrounding India by spreading influence in countries like Maldives and others. The editor said the cartoon is Very defeatist and the China problem is being overplayed"


In a detailed Facebook post, cartoonist Satish Acharya outlined that he had decided to exit the newspaper Mail Today after the editor chose to publish a photo instead of his cartoon on China.


Acharya, who began his career with Mumbai tabloid Mid Day, said that this was not the first time he had to struggle to get his cartoons published. The Mail Today editor has previously asked him to Replace Modis character with any general BJP character.

The incident has raised a huge hue and cry on social media (where else) with several comments highlighting the increasing stranglehold of the government on media organisations critical of the BJP regime.


Image: Satish Acharya's cartoon that the editor dropped
« Back to LIVE