By TP Sreenivasan
Last updated on: October 14, 2010 15:08 IST
India set the goal of winning as many votes as possible in the General Assembly secret ballot.

The 187 out of a possible 192 votes may well be an all-time record, notes T P Sreenivasan who was India's deputy permanent representative at the United Nations when India last served on the UN Security Council 18 years ago. 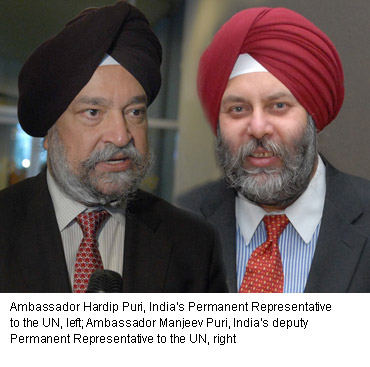 December 31, 1992, was an important day for the Indian Permanent Mission to the United Nations in New York.

He and I took a long time to wind up the president's office next to the Security Council chamber. We took down Mahatma Gandhi's portrait, which adorned the wall during the Indian presidency, said goodbye to the Indian Tea Board team, which was serving tea to the delegates throughout the month.

As we walked out of the Security Council into the cold night, we spoke very little. It was an emotional moment.

We did not know then that it would take India another 19 years to return to the Security Council chamber. It will be another emotional moment when Ambassador Hardip Puri and his deputy and look-alike, Manjiv Puri, enter the chamber on January 1, 2011.

After a long period of uncertainty, disappointment and stoicism, the two Puris and their colleagues will be joining the Security Council which Ambassador Gharekhan and I left at the end of 1992.

It is as much an accomplishment for them as for India, and they have an onerous responsibility ahead of them.

India should have been back in the Security Council by 1997 if the customary rotation established within the Asian Group was honoured.

When the notional turn of South Asia came for the 1995-96 term came, we supported Sri Lanka. But unknown to us, South Korea, a relative newcomer to the UN, struck a deal with Sri Lanka, by which Sri Lanka withdrew in favour of South Korea.

We tried to reason with South Korea that it should wait for the turn of East Asia next year, but South Korea, we discovered, had already campaigned around the globe and secured broad support.

Japan, which had retired with us in 1992, had already announced its candidature for the next term. We had no choice except to announce our candidature against Japan for the 1997-1998 term, although we knew we did not have a chance to win.

Instead of withdrawing in good time, we went to a vote on the basis of a wrong judgment that we could win. India got 40 votes including ours.

The 1996 fiasco was a rude shock to the political leadership, which was led into thinking that we had a chance to win.

One consequence of the debate was the realisation that an overwhelming number of the members of the UN had not served even once on the Security Council, while countries like India, Pakistan and Japan had served several times.

Virtually every Asian country announced its candidature for successive years and there was no clear slot available for India for 20 or more years.

India was reluctant to contest against smaller countries in Asia at a time when the overwhelming sentiment was in favour of small countries serving on the Security Council. Some statements by Indian representatives also gave the impression that India would want to enter the Security Council only as a permanent member.

Our candidature for the post of the Secretary General and its aftermath also were not conducive to a contest for a non-permanent seat.

A decision to persuade a friendly Asian State to withdraw in favour of India was taken a couple of years ago, but this delicate effort bore fruit only early this year.

As the country endorsed by the Asian Group, India's victory was a foregone conclusion, but India did not take a chance and set the goal of winning as many votes as possible in the General Assembly secret ballot.

Even though a two-thirds majority was sufficient, we secured 187 out of a possible 192 votes, the biggest number polled by any country this year.

It may well be an all-time record. The ministry of external affairs and our mission in New York should be congratulated on this historic victory.

We may never know which were the five countries which either were absent or did not support India in the secret ballot.

In a strange gesture, the Pakistan permanent representative is said to have shown his ballot for India to many in the General Assembly hall.

A UN veteran said he should have deposited the ballot in the box instead of showing it around!

If Pakistan and China voted for India, we should be aware that there are some others who wish to deny India its moment of glory.

It must be stated that the impression that India will accomplish much in the international arena by virtue of its new position and that our presence in the Council with Brazil and South Africa will somehow advance our candidature for permanent membership is unfounded.

The permanent members still call the shots in the Security Council and most decisions of the Council are pre-cooked by the permanent five.

They do involve the others in the decision-making process and accommodate marginal changes, but they use all their persuasive powers to influence decision-making by the non-permanent members.

The nonaligned caucus in the Council has a certain bargaining power as any decision should have nine positive votes, but the unity of the nonaligned is brittle in the face of the unified action by the permanent five.

The non-permanent members have an illusion of power as they get consulted, but in the ultimate analysis, they have to succumb to pressure.

In many cases, India and other non-permanent members may not be interested in some of the issues that come up in the Security Council.

India will do its best, as it has done in the past, to work for the common good and win some approbation, but it cannot be expected to gain any spectacular success.

India's record in the Security Council in the next two years may enhance our prestige and make us more worthy of permanent membership, but it is not our unworthiness that has prevented an expansion.

Of late, there have been encouraging signs such as the discussions entering a negotiating mode and a thaw in the US position, but we are likely to leave the Council in 2012 to wait for our next turn to be a non-permanent member.

In any event, India has already given up its claim to veto without getting any assurance of permanent membership.

Being on the Security Council is a dream come true for professional diplomats. It gives them extraordinary exposure to world affairs and special access to the secretariat. One feels a sense of real power and importance that no other UN body imparts.

The Puris and their colleagues will enjoy their stint with the full support of the government and the people of India.

China wants to be part of Kashmir dispute