The importance of being Rahul Gandhi 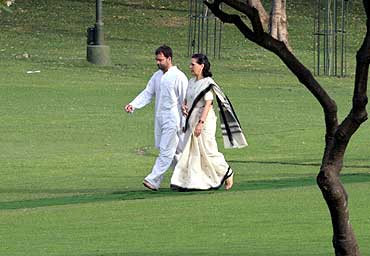 Rahul Gandhi turns 40 on June 19. Rediff.com's special series will look at various aspects of the life, times and politics of the man who could be prime minister.

Here, Amulya Ganguli lists the reasons why the Congress general secretary has not yet stepped into the limelight in Delhi's power corridors.

Rahul Gandhi epitomises the special features of feudal politics. No one will deny that he is at present the second most important person in the Congress and a future prime minister. But he still prefers to play a subdued role, keeping silent about controversial issues and apparently preoccupied with building up the party from the grassroots level.

All of this is unexceptionable. Except that someone like him in a non-feudal party would have been expected to be far more forthcoming with his views if only to let the people know more about their future leader. He would have had to prove himself since he could not take his ascent to the top echelons for granted.

Instead, Rahul's behaviour is much like an heir apparent who is restraining himself from throwing his weight around lest the voters get frightened. The young son of the zamindar is seemingly intent on building a favourable image of himself before he takes charge.

This compulsion isn't there in a non-feudal outfit because power is not inherited. It does not pass from the parent to the offspring. It is acquired through oratory, an aggressive flaunting of intellectual calibre, ruthless exploitation of the weaknesses of rivals -- and luck. But, since the road to the top is less rough in a feudal outfit, the next-in-line can plan his moves in greater leisure.

It is not known whether Rahul's reticence is the result of the lesson which the Nehru-Gandhi family has learnt from Sanjay Gandhi's conduct, whose brashness was noted even by a family member, B K Nehru, who described the enfant terrible as a 'wayward, uneducated, inexperienced boy'. With Varun Gandhi, too, behaving in a similar manner, it may have been a tactical decision on Rahul's part to demonstrate his reserve.

Such an interpretation may not be too far-fetched considering that Rahul wasn't so economical with his comments earlier. Apart from saying that he could have become the prime minister if he had 'wanted to', he was also not cagey about asserting what a member of his family would have done to save the Babri Masjid if he was the prime minister -- an obvious dig at then prime minister P V Narasimha Rao, who had slept through the fateful afternoon, and a not-so-veiled appeal to the Muslims to return to the Congress now that a Nehru-Gandhi was again in charge.

More recently, however, Rahul has been careful with his words. His last major intervention in official policy was to back the nuclear deal. It was undoubtedly his views which persuaded mother and Congress President Sonia Gandhi to withdraw her objections, which she had earlier expressed when she said that the Communists had a point in opposing the deal.

The other occasion when Rahul seemed to have differed from his mother was when he said that persistence with the loan waivers for indebted farmers could lead to bankruptcy.

It will be interesting, therefore, to find out what Rahul thinks about the party president's other fads -- caste in census, women's bill, the 'development-first' route for containing the Maoist threat, preference for 'socialists' in the National Advisory Council -- especially when not inconsiderable sections in the Congress are not too happy about the first two items. But Rahul has maintained a deafening silence.

There are reasons for this diffidence, for any expressions of doubt about these initiatives will reveal a crack at the top which will be hugely unsettling for the party. On the other hand, if he supports them, it will upset the current delicate balance between the 'socialists' in the party and the 'neo-liberals' in the government to the detriment of both.

There is probably a third reason as well. Rahul may be biding his time, waiting for a major achievement of his own before playing his cards more openly. So far, he has been credited only with having read the political tea-leaves well to persuade the Congress to go it alone in Uttar Pradesh and Bihar last year.

It succeeded in UP because the mercurial Mayawati could not sustain her Dalit-Brahmin rainbow coalition, but failed in Bihar against a purposeful Nitish Kumar.

Rahul is also testing the waters in Tamil Nadu, for he has sensed that post-Karunanidhi, the state will be up for grabs with M K Stalin and M K Alagiri competing with each other to undermine the Dravida Munnetra Kazhagam. Besides, he is in no hurry.

The next general election is three years away and there is no reason why the Congress cannot win, given the state of the opposition. The Left is withering away while the Bharatiya Janata Party has lost all its pet issues: Ram temple, Ram setu, terrorism, weak prime minister, et al.

Rahul can take his time, therefore, to woo the Dalits, apparently his primary target, for he is aware that Mayawati's writ will remain largely confined to UP and perhaps not for long. With the crumbling of the Samajwadi Party and the Rashtriya Janata Dal, the Muslims, too, will turn to the Congress in UP and Bihar.

Apart from the Dalits and Muslims, Rahul is also focussing on the youth for obvious reasons. When the former BJP president Rajnath Singh called him a bachha, Rahul's riposte was, 'Yes, I am a bachha. But then 70 per cent of the country's population is bachha. What kind of a message is Rajnath Singh sending?'

Like the kind of appeal which his father (Rajiv Gandhi) had before the Bofors scandal hit him, Rahul is aware of the ease with which he can reach out to the younger generation and the opposite sex. The traditional assets of the dynasty -- good looks and a pleasing personality -- are his advantages.

But there are traditional disadvantages as well. These relate mainly to the charges of corruption and cynicism which have haunted the Congress for long. Bofors was the last major scandal, which slashed the Congress's tally of Lok Sabha seats from 415 in 1984 to 197 five years later to show how a scam can undermine a party's position.

The precipitous fall not was unlike the one in 1977 when, too, the voters made no secret of their rejection of authoritarianism. Their anger was apparently due to the fact that the Emergency of the two previous years was an expression of the party's cynicism when a prime minister interpreted the threat to her position from a court case as a threat to the country.

Since then, corruption has enveloped the Congress's allies rather than the party itself, but cynicism remains one of its favourite ploys, as is evident from the suspected manipulation of the Central Bureau of Investigation, which included the unfreezing of Ottavio Quottrocchi's London bank account, containing, it has been alleged, some of the Bofors money.

It is understandable that a 125-year-old party will have its moments of glory as well as shame. In the Congress's case, much of the acquisition of shame has been in the last four decades when the aura of the Independence period began to fade.

If Rahul intends to rebuild the party, he will not only have to bring those communities which had deserted it into the party, but also cleanse its currently tainted reputation.

If the young man can achieve this feat, he will be a true legatee of Jawaharlal Nehru. 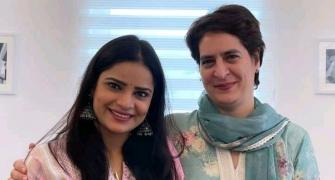