News
Business
Movies
Sports
Cricket
Get Ahead
Money Tips
Shopping
Sign in  |  Create a Rediffmail account
Rediff.com  » News » Kalmadi isn't the only one to blame for CWG mess

Kalmadi isn't the only one to blame for CWG mess 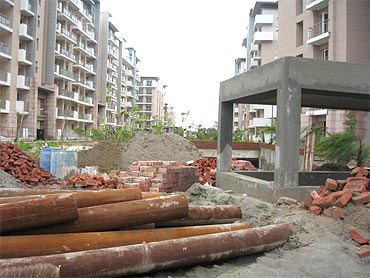 Officially, Suresh Kalmadi had only Rs 6.7 billion to play around with as the Commonwealth Games boss.

As against this, Sheila Dikshit's government was allocated Rs 16.56 billion to upgrade the capital's infrastructure in time for the Games, notes Virendra Kapoor.

They may have virtually stripped Suresh Kalmadi of all powers as the chairman of the Organising Committee, Commonwealth Games, but he still continues to be its titular head.

And that way, Kalmadi serves a very useful purpose insofar as various ills of omission and commission of all others deeply connected with the preparations of the Delhi Games are best shielded from a prying media and an angry public seeking accountability and transparency.

So, whether it is Delhi Chief Minister Sheila Dikshit or Union Urban Development Minister Jaipal Reddy, Kalmadi's continuance as the notional head of the organising committee helps to make him a scapegoat while everyone else gets away by default.

Come to think of it, Kalmadi as the head of the OC had only a small fraction of the funds at his disposal to fool around with while Dikshit and Reddy control huge chunks of money earmarked for the Games.

Without for a moment seeking to make light of Kalmadi's crookedness, one would warn against letting all others, including those holding key ministerial posts, go scot free by sheer default.

For, officially, Kalmadi had only Rs 670 crore (Rs 6.7 billion) to play around with as the OC boss. As against this, Dikshit was allocated Rs 16,560 crore (Rs 16.56 billion) for upgrading the capital's infrastructure in time for the start of the Games in early October.

Now, quite aside from the fact that almost all projects being implemented by the Delhi government are running precariously behind schedule -- in itself an act of great irresponsibility and mismanagement -- there is evidence of huge escalations in each project.

How and why the originally estimated costs of projects handled by the Dikshit government ballooned out of control is a question that the Kalmadi-obsessed media has failed to ask.

A small but telling example of the profligacy of the Delhi government is the wasteful expenditure on contracting the supply of flowers, flower pots, etc, for the Games. Apparently, the Dikshit government earmarked about Rs 135 crore (Rs 1.35 billion) on these easily perishable/breakable materials, including the supply of bougainvillea from a party in Andhra Pradesh.

As much as Rs 10 crore (Rs 100 million) was to be spent on buying flower pots for 'beautifying' only those roads which lead to the stadiums.

Now, how many pots will be actually supplied, and how many will be stolen and broken while lying along the roads is best left to individual imagination -- unless, of course, Dikshit can persuade the Delhi police to post additional guards to safeguard these awfully expensive flowerpots.

Meanwhile, the money spent on flowerpots may have already come to naught since the security agencies have disallowed their presence inside the stadiums.

Also, the capricious nature of the decision-making by the Delhi government was duly pointed out by none other than Union Sports Minister Manohar Singh Gill. While questioning the wisdom of locating the Games village across the Yamuna river in East Delhi, Gill said that it ought to have been built near the main arena of competition, that is, the Nehru Stadium off Lodhi Road in New Delhi.

It was in this context that Gill recalled the Punjabi fable of Sassi-Punnu, the star-crossed lovers who lived on either side of the river bank and died mid-stream while crossing it for a tryst.

The implication of the sports minister's reference to the Sassi-Punnu tale could not be lost on anyone, least of all on the security agencies which are already paranoid about terror threats during the Games.

Had the players' village been located in the vicinity of the Nehru Stadium hundreds of crores of taxpayers' money being spent on building a monstrosity of an elevated road over the Yamuna river, the rail tracks and other busy thoroughfares would have been avoided.

But then the fact that Dikshit's son, Sandeep, represents a Lok Sabha constituency on the other side of the river and the location of the village would result in sprucing up all the infrastructure around it would give him the bragging rights before his constituents, never mind the additional thousands of crores of taxpayers' money and the logistics of providing security and other services to the players' residence far away from the actual arena of competition.

No less questionable was the decision by the Delhi government to pay the builder of the village in advance in breach of the original contract.

It is remarkable that the private builder after duly bagging the contract to build the village backed out at the last minute, arguing that he did not have adequate funds to fulfil the original commitment.

Instead of inviting fresh bids, a very generous Delhi government got the Delhi Development Authority to loan hundreds of crores of rupees to the builder and undertook to recover the money from the sale proceeds of the built-up flats after the Games.

It was another matter that at Rs 12,000 per square foot, there were hardly any takers for these flats on the wrong side of the river.

Now come to the handiwork of the Reddy ministry. Though he, like Prime Minister Manmohan Singh, enjoys a reputation for financial integrity, and, not unlike Singh, Reddy too has not had any demonstrable impact on the functioning of one of the most corrupt organisations in the country, the Central Public Works Department.

You can see the mess the CPWD has created all over the national capital.

Connaught Place, the heart of Lutyens' Delhi, and billed as the showpiece-attraction for the visitors to the Games, has been turned into a series of craters where even the locals venture at great bodily risk.

Aside from the 20-foot deep holes in the ground, mounds of debris, loose wires and construction material are strewn all around. Heavy rains have further added to the muck and slush, making it hazardous for ordinary people barring the most adventurous types to go anywhere near what is still popularly called CP rather than Rajiv Chowk as Mani Shankar Aiyar would want everyone to call it.

In sum, there are too many involved in creating the pre-Games mess. Kalmadi necessarily isn't the biggest one. After all, when officially Rs 28,054 crore (Rs 280.54 billion) is being lavished on this expensive tamasha, -- in reality the expenditure could be far above that figure -- it would be too much to expect that the Congress party would allow a political lightweight like Kalmadi to monopolise the gains, hidden and not-so-hidden, accruing from this colossal expenditure.

Think of it. Think of the all-pervasive Congress culture of 'live and let live' and you will get the complete picture. But it helps immensely that this Congress MP from Pune has become the proverbial fall guy for all that is wrong in the preparations for the October Games.

That way everyone else is shielded from the prying eyes of the media and the public.

Games or no Games, why Delhi won't change

The school that posed a threat to the CWG