Is US okay with China supplying N-reactors to Pak? 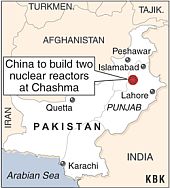 By choosing to keep mum over China's plans to deliver two new nuclear reactors to Pakistan, the Obama administration has once again enlisted the co-operation of China in strengthening Pakistan's capacity in various fields. Indian policy-makers ought to take this seriously, writes B Raman.

When he was Pakistan president, General Pervez Musharraf had sought to counter the Indo-US deal on civilian nuclear co-operation at two levels. He did not oppose the deal. Nor did Pakistan energetically try to have the deal disapproved by US Congress through Congressmen sympathetic to it.

Instead, it sought to counter the deal by using the following arguments. First, it would be discriminatory to Pakistan if it (the nuclear deal) was not made applicable to it too. Second, it would create a military nuclear asymmetry in the subcontinent by enabling India to divert its domestic stock of fuel for military purposes, while using the imported fuel for civilian purposes under international safeguards. Thus, it would have an adverse effect on Pakistan's national security.

The Bush administration rejected the Pakistani arguments by pointing out that Pakistan's economy was unlikely to grow as rapidly as the Indian economy in the short and medium terms and hence it should be possible to meet its energy requirements from conventional sources. The Bush administration also repeatedly made it clear that in view of the role of Dr AQ Khan -- the so-called father of Pakistan's atomic bomb -- and some of his colleagues in clandestinely supplying nuclear technology to Iran, North Korea and Libya, Pakistan cannot be treated on par with India, which had an unimpeachable record of non-proliferation.

During his State visit to China in February 2006, Musharraf requested for Chinese assistance in the construction of six more nuclear power stations, with a capacity of 600 or 900 MW each. The Chinese reportedly agreed in principle to supply two stations of 300 MWs each to be followed later by four more.

This subject again figured in the general's bilateral discussions with President Hu Jintao on the margins of the Shanghai Cooperation Organisation summit in June 2006, and in the subsequent discussions between the officials of the two countries, who met at Islamabad and Beijing for doing the preparatory work for Hu's visit to Pakistan from November 23 to 26, 2006.

General Musharraf and his officials were so confident that an agreement in principle for the construction of two nuclear power stations would be initialled during Hu's visit that they even set up a site selection task force.

However, there was no substantive reference to the co-operation between China and Pakistan in the field of civilian nuclear energy during Hu's visit to Pakistan. The joint statement issued on November 25, 2006, by General Musharraf and Hu said: 'The two sides also agreed to strengthen cooperation in the energy sector, including fossil fuels, coal, hydro-power, nuclear power, renewable sources of energy as well as in the mining and resources sector.'

Addressing a press conference after his talks with General Musharraf, Hu said in reply to a question on nuclear co-operation: 'Cooperation in the energy sector is an important component in the relationship between the two countries. We reached a common understanding on strengthening energy cooperation. We would continue this cooperation in future as well.'

Well-informed Pakistani sources attributed the more-guarded Chinese position to the bilateral discussions between President George Bush and Hu at Hanoi in the margins of the summit of the Asia Pacific Economic Co-operation organisation on November 18 and 19, 2006.

The speculation was that during these bilateral discussions, Bush pointed out to Hu that the Chinese supply of new nuclear power stations to Pakistan could not be projected as a continuation of the Chinese assistance to Pakistan under a 1985 bilateral co-operation treaty under which Chashma and Chashma II were given and hence would need the clearance of the NSG.

According to this speculation, Bush was also reported to have referred to the Pakistani rejection of repeated requests from the International Atomic Energy Agency to hand over Dr AQ Khan for an independent interrogation and pointed out that the Chinese supply of the new power stations could encourage Pakistan's non-cooperation with the IAEA.

The Chinese attempt to project its proposal to supply two more power reactors to Pakistan as continuation of an old project of 1985 entered into by China with Pakistan before the NSG safeguards imposing restrictions on the supply of civilian nuclear equipment and technology to countries that have not signed the Nuclear Non-Proliferation Treaty and not a new project was rejected by the Bush administration.

The Chinese sought to compare their Chashma project with the Russian project for the supply of nuclear power stations to India being set up at Koodankulam in Tamil Nadu. The Russians went ahead with the project on the ground that the agreement for its construction had been reached before the NSG restrictions went into effect.

Following the rejection of the Chinese arguments by the Bush administration, the Chinese did not take any further action for going ahead with their proposal. During their visits to China, President Asif Ali Zardari and other Pakistani leaders kept pressing the Chinese to finalise the agreement and start its implementation. The Chinese were reluctant to do so.

In a surprise move, the Chinese have now announced that they are going ahead with the project. There have been two announcements in this regard. The first is by the China National Nuclear Corporation, which set up Chashma I and is now constructing Chashma II. It has now announced that an agreement for the provision of a Chinese loan for two new nuclear reactors at the Chashma site designated as Chashma III and IV was signed with Pakistan on February 12 and that it went into effect in March 2010.

The second announcement is in the form of a confirmation by the Chinese foreign ministry. The Global Times, the English daily of the Party-owned People's Daily group, reported as follows on April 30, 2010: 'Beijing confirmed Thursday (April 29) that Chinese and Pakistani officials have signed an agreement to finance the construction of two nuclear reactors, to be built in Pakistan by Chinese firms. Jiang Yu, a spokeswoman for the Chinese Foreign Ministry, said Thursday that the nuclear deal conforms to international standards set by the International Atomic Energy Agency.'

The paper quoted Shen Dingli, executive deputy president at the Institute of International Studies at Fudan University, as saying: 'Beijing and Islamabad had started joint civilian nuclear projects before China joined the NSG in 2004, which means the mutual cooperation is legal. Washington can't find reasons to criticise Sino-Pakistani nuclear cooperation.'

This is a reiteration of the original Chinese stand that Chashma III and IV are extensions of an agreement of 1985 signed before the NSG safeguards went into effect and hence not affected. This would also indicate that China does not consider it necessary to seek the approval of the NSG for going ahead with the construction of Chashma III and IV.

The surprise Chinese announcement has come at a time when Pakistan has stepped up pressure on the US for a US-Pakistan civilian nuclear co-operation agreement similar to the agreement signed with India in July 2005, followed by action to have the restrictions against Pakistan lifted. This issue was raised by Pakistan at the recent ministerial-level strategic dialogue between the two countries at Washington, DC.

While the Obama administration was reported to have rejected the Pakistani request, there were indications that it was treating the AQ Khan affair as a closed chapter and was sympathetic to Pakistan's energy needs. The US has already made a commitment to help Pakistan improve its conventional energy production capacity.

While rejecting the Pakistani request for a nuclear agreement once again -- though not as firmly as was repeatedly done by the Bush administration -- did the Obama administration indicate to China that it would not raise an objection to China's going ahead with its proposal for the construction of Chashma III and IV by accepting the Chinese interpretation that it did not attract the NSG safeguards?

If so -- I am inclined to believe it is -- this is the second instance in which the Obama administration has enlisted the co-operation of China in strengthening Pakistan's capacity in various fields.

The Los Angeles Times reported on May 25, 2009, that the Obama administration had appealed to China to provide training and even military equipment to help Pakistan counter a growing militant threat and that Richard C Holbrooke, the administration's special representative for Pakistan and Afghanistan, had visited Beijing in this connection for talks with the Chinese authorities.

Following his visit, the Chinese government announced an aid package of $290 million to enable Pakistan strengthen its counter-terrorism capability.

Indications of the Obama administration taking a benign view of China's military and nuclear co-operation with Pakistan ought to be taken seriously by Indian policy-makers.

The writer is additional secretary (retired), Cabinet Secretariat, Government of India, New Delhi, and, presently, Director, Institute For Topical Studies, Chennai. He is also associated with the Chennai Centre for China Studies